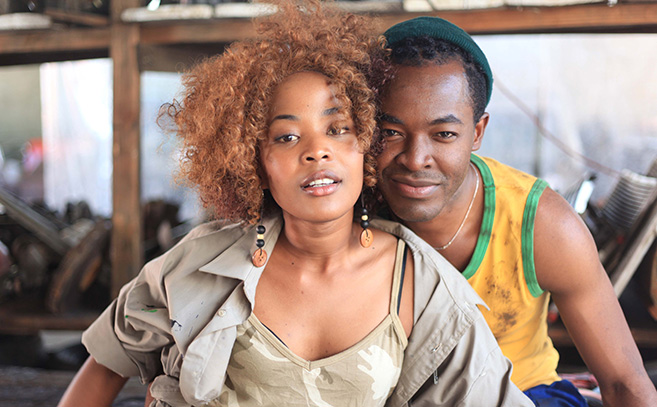 The highly anticipated South African film Ayanda, directed by Sara Blecher and produced by Real Eyes in association with Leading Lady Productions, has been announced as the opening night film of the 36th Durban International Film Festival (DIFF) which takes place from 16 to 26 July this year.

DIFF is organised by UKZN’s Centre for Creative Arts (CCA- a special project of the Deputy Vice Chancellor of the College of Humanities, Professor Cheryl Potgieter.

Set in the vibrant, Afropolitan community of Johannesburg’s Yeoville, Ayanda is a coming-of-age story of a 21-year-old Afro-hipster, who embarks on a journey of self-discovery when she has to fight to save her late father’s legacy – a motor repair shop - when it is threatened with closure.

She’s thrown into a world of greasy overalls, gender stereotypes and abandoned vintage cars once loved, now in need of a young woman’s re-inventive touch to bring them back to life again.

‘We are pleased that this feel-good film will open this year’s festival,’ said Mr Pedro Pimenta, Director of DIFF. ‘The opening film of this, the most prestigious international film event in SA, needs to reflect a clear priority established by the festival to reach and develop local audiences.’

‘The recently published National Film and Video Foundation report on audiences in this country, is very informative and revealing in that while the industry has been successfully structured and supported from all quarters to allow a regular flow of SA content, much still needs to be done for this content to reach local audiences. By once again opening the DIFF with a strong SA film, we endorse this objective,’ said Pimenta.

This is the second opening night film at DIFF for director Sara Blecher. Her film Otelo Burning opened the 2011 edition of DIFF to critical acclaim. ‘We are very proud of Ayanda and are thrilled to have it selected as the opening film at this year’s festival. The film had a very successful screening in Cannes last month and we look forward to screening it to festival-goers in Durban,’ said Blecher.

Co-producer for the film Terry Pheto added, ‘Ayanda celebrates the diversity of our country and revels in the fact that we are a multi-cultural, colourful and exciting melting pot of Africa. With this film we have tried to capture the Afropolitan nature of our country and the energy of its people.’

Pimenta added, ‘Ayanda offers an interesting and positive convergence of talents style, resources and distribution potential for the film market. There is a real sense that reaching an audience has been the most important motivation equally shared by the filmmakers and their financiers in its creation.’

‘What is also particularly encouraging in terms of the South African film industry is that the film, originally titled, Andani and the Mechanic, was a project in the 2013 Durban FilmMart (DFM), the co-production and finance forum of the DIFF and the Durban Film Office. The film is one of five titles that have been part of the DFM process over the years that will be screened this year at DIFF,’ he said.

The festival includes more than 200 theatrical screenings and a full seminar and workshop programme, as well as the Wavescapes Film Festival, and various industry initiatives, including the 8th Talents Durban (presented in cooperation with the Berlinale Talents) and the 6th Durban FilmMart co-production market (presented in partnership with the Durban Film Office).

For more information go to www.durbanfilmfest.co.za