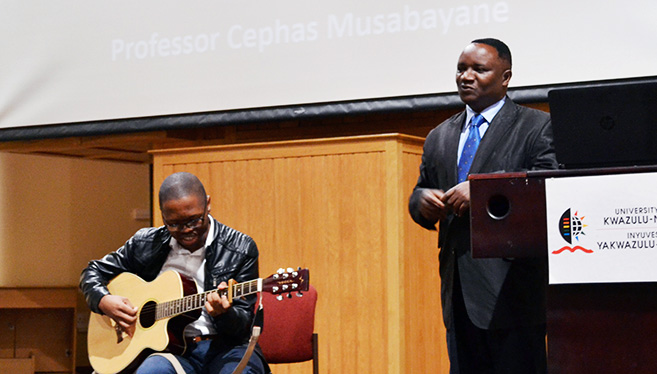 Students perform at the memorial service.

Paying Tribute to the Life and Times of Professor Cephas Musabayane

The College of Health Sciences recently paid tribute to the life, times and remarkable contribution to academia made by the late Professor Cephas Musabayane.

Friends, colleagues and a host of students he mentored and supervised shared fond memories of the outstanding academic with his family members during a memorial service at UKZN.

Musabayane joined UKZN in 2003 and became Head of the School of Medical Sciences in the previous Faculty of Health Sciences, a position he held for four years. He obtained national and international recognition for his work through presentations and more than 80 publications.

‘His were attributes of a true academic’, said the Dean and Head of School Laboratory Medicine and Medical Sciences (LMMS), Professor William Daniels, supported by the School Academic Leader for Research, Dr Musa Mabandla.

Daniels said Musabayane would get very upset when his students failed him because he saw himself mirrored in their work. ‘He had very high standards and always strived for the best,’ said Daniels, who also lauded the high quality research he produced.

Musabayane was named a Life Fellow of the Physiology Society of Southern Africa and received membership of both the American and British Physiological Societies. Musabayane was also well known internationally for his work on the insulin patch for the management of Type 2 diabetes.

Tributes paid to Musabayane included a poem and song written specially for the day by Dr Blessing Mkhwanazi and Mr G Mavondo. Student, Ms Hlengiwe Sibiya who spoke highly of the professor, delivered a moving presentation, highlighting the many memories he shared with his students grooming them for success. ‘I would say Prof was an African tree of knowledge,’ said School of LMMS Developmental Lecturer, Ms Lihle Qulu.

Family spokesperson, Mr R Chidzonga, said it was indeed a great loss and thanked the university community its vigorous relationship with Musabayane.