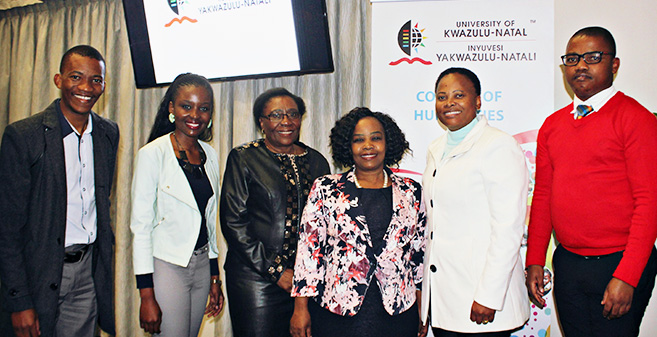 The course was attended by school children from KwaZulu-Natal and Gauteng.

Panellists were UKZN Emeritus Professor and former Vice-Chancellor of the University of Zululand, Professor Fikile Mazibuko; College of Humanities Dean for Teaching and Learning, Professor Nobuhle Hlongwa, and Dean and Head of the School of Nursing and Public Health, Professor Busisiwe Ncama.

They also shared with pupils their leadership achievements in their respective fields whilst exploring leadership and some of the challenges they have encountered in their journey.

Ncama believed the panel was an opportunity for her as an African female professor to inspire the youth to become successful in their respective and future career fields and to ‘strive to lead with integrity and passion’.

Throughout the reflective discussion, two emerging themes became evident- servant leadership and camaraderie amongst women professors. The speakers shared challenges they had encountered and still faced as women professors and leaders while still maintaining good governance and excelling at their research.

Mazibuko noted that through transformative leadership, there was still the element of chauvinism present. ‘There is a mask of fear and insecurity in chauvinism and the use of culture to undermine a person in authority. Break those cultural stereotypes and barriers!

‘Women assuming leadership positions have to challenge established patriarchal and hierarchal styles of leadership and redefine power relations rather than allowing themselves to be co-opted.  They must also navigate and take risks of advancing the transformation and reconstruction agendas.’

It was generally agreed that challenges increased through elements of gender, age and race but with resilience, self-belief and a positive attitude the negatives could be overcome.

Said Hlongwa: ‘Have a clear vision and direction and give regular feedback to those that you are leading, understand and respect the different cultures and leave behind a legacy you are proud of.’

Pupils were further encouraged to identify mentors and coaches to help them as future leaders.

The panellists also urged women in higher education and future women leaders and youth leaders to champion causes that advanced the rights of women in society and the workforce.  They were also encouraged to facilitate a professoriate of academic excellence in which women academics were able to be successful agents of transformation, nation-building and empowerment.