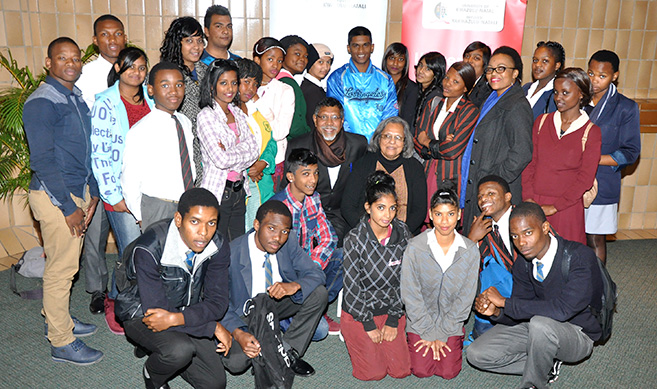 Some of the High School learners and guests that attended the documentary screening of the life and times of Mahatma Gandhi.

UKZN in partnership with the Lenny Naidu Development Institute and the Mahatma Gandhi Trust hosted high school pupils at a screening of a documentary on the life and times of Mahatma Gandhi.

The Grade 12 youngsters - from schools in Chatsworth, Lamontville and KwaMashu - were part of the Lenny Naidu Development Institute leadership course.

The screening, organised by UKZN’s Corporate Relations Division, commemorated the  anniversary of the arrival of Mahatma Gandhi in South Africa.

The first part of the film showed the life that Gandhi led while in India where he encouraged people to make their own products and not rely on imports. The second part showcased his life in South Africa after his arrival in1893.

The screening was followed by a discussion with Gandhi’s grand-daughter, Ms Ela Gandhi, on the role her grandfather played during the apartheid years.

Ela said her grandfather encouraged people to be the change they wanted to see in the world. She encouraged the audience to support South African manufactured products as this would ensure that local people would uplift each other as a nation.

During the discussions, some of the learners said they saw Gandhi as a visionary, a leader, a peacemaker and a liberator who preached non-violence.

Ms Slindile Ngcobo of the Witteklip Secondary School said she learned that Gandhi was not ashamed of who he was and that he had encouraged people to start their own businesses by using resources available to them locally.