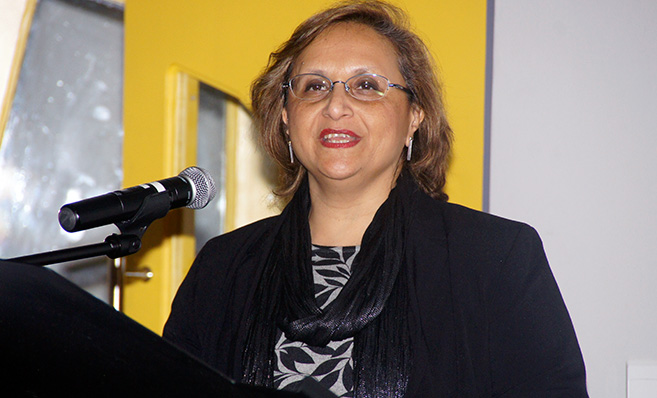 Association of Lexicography Conference at UKZN

Experts in Lexicography, Corpus Linguistics, Computer Science and Terminography from Africa and around the world attended the 20th International African Association for Lexicography (AFRILEX) Conference on UKZN’s Howard College campus.

Keynote speakers at the conference, hosted by the Language Planning and Development Office, included Dr Michael Rundell of Macmillan in the United Kingdom and Professor Mbulungeni Madiba, an Associate Professor and Co-ordinator of the Multilingualism Education Project at the University of Cape Town.

In his paper titled: “From Digital to Print: Implications for Dictionary Policy and Lexicographic Conventions”, Rundell explored issues of space constraints in traditional print dictionaries and the introduction of hashtags as words in some dictionaries.

Illustrating the dynamic nature of dictionaries, Rundell said the hashtag #BlackLivesMatter was declared the Word of the Year by the American Dialect Society in 2014.

Madiba’s topic was: “Between a Rock and a Hard Place: A Critical Reflection on the Intellectualisation of African Languages”.

Other academics presented papers on a wide variety of subjects ranging from “Gender Sensitivity in Isichazamazwi SesiNdebele” by S Sayi to “Reflections on Talking Dictionaries in Zimbabwe’s Indigenous Languages: Can we Really Talk” by D Nkomo and E Chabata.

Deputy Vice-Chancellor of Teaching and Learning, Professor Renuka Vithal, highlighted UKZN’s bold step in requiring students to demonstrate competency in isiZulu. ‘Mathematics is also regarded as a language, and acquiring mathematics has similarities to acquiring any language. So my interests and knowledge have assisted in this process,’ said Vithal.

A special session also took place on strategies to build a multilingual open education resource term bank for Higher Education. As a follow up, there will be a special interest group session on the sidelines of UNISA’s National Conference on Multilingualism in Higher Education in August to outline practical steps towards multi-tier computational resource.

The President of AFRILEX, Dr Maropeng Mojela, encouraged lexicographic scholars from Zimbabwe and Gabon to participate actively at conferences.

Mojela acknowledged the efforts of the Director of ULPDO, Dr Langa Khumalo, and his Local Organising Team, as well as AFRILEX Deputy President Professor Danie Prinsloo for their efforts in ensuring the success of the conference.

The conference included a reception hosted by eThekwini Mayor, Mr James Nxumalo, and a post-conference excursion on the Inanda Heritage Route.