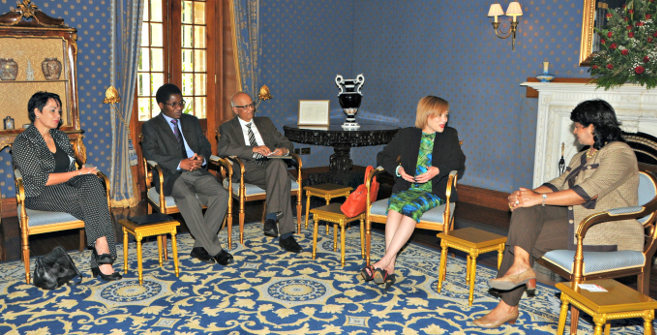 The Mauritian President, the first woman president of Mauritius is a highly rated academic and is very familiar with the South African science system. She is the recipient of various international awards including the L'Oréal–UNESCO Prize for Women in Science (2007) and the African Union Award for Women in Science.

At the meeting held at State House, the Mauritian President acknowledged UKZN’s standing as a research led university and mentioned her engagements with Professor Quarraisha Abdool Karim, one of South Africa’s leading HIV and AIDS researchers from UKZN’s Centre for the AIDS Programme of Research in South Africa (CAPRISA).

The President indicated her support and endorsed the partnership between the College of Humanities and the Mauritius Institute of Education as a direct outcome is increasing the number of academics in Mauritius who hold doctoral degrees. A suggestion by the President is for UKZN to consider extending a formal partnership with the University of Mauritius.

Professor Potgieter and her team are exploring the option as currently the College of Humanities has academics who collaborate with and assist the University of Mauritius with various academic endeavors.