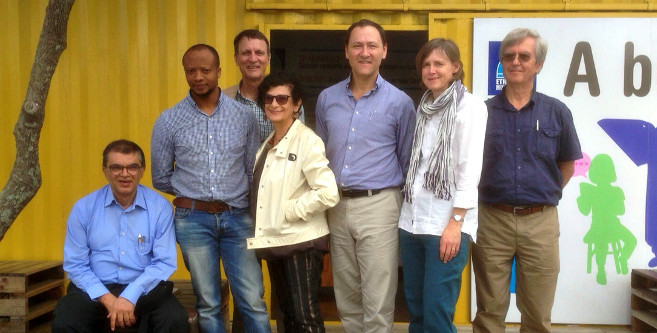 Architecture Lecturer Mr Juan Solis (third right) who has been selected as a judge for the KZNIA Award competition.

Architecture Lecturer Mr Juan Solis has been selected as a judge for a national architecture competition organised by the KwaZulu-Natal Institute for Architecture (KZNIA).

Solis is among a select group of architects asked to visit 27 built projects in KwaZulu-Natal and to select the best architecture projects in the region for 2014 which will go forward to the national competition later this year.

‘It was a great honour for me to participate in this community activity representing the University. Being the only academic member of this panel allowed me insight into the province’s recent architectural projects and to further understand the complexities and social implications of these projects and to stay updated on the architectural landscape.’

Solis and the other judges visited all the buildings over three days with a brief to identify four major criteria: architectural excellence, user benefits, historical values, renovation and restoration, and social Influence.

Projects varied from an exquisitely designed beachfront house with an unlimited budget to a village project for 800 children housing mainly orphans to a site on a former industrial area that incorporated wetlands as a design concept.

There was also a house completely off the electrical grid as well as a renovated colonial building in Pietermaritzburg.

‘It is quite clear that there is a trend to produce projects that are sensitive to the environment,’ said Solis. ‘The architectural industry is responding to the realities of South Africa with architectural designs and technology aimed at addressing the environmental crises and the need to be eco-friendly and sustainable.’

Solis then explained how young architects are now looking at sustainable projects, including green roof undertakings which are covered in his lectures.

Four of the projects will be selected for an Outstanding Architecture award and go forward to the national competition in October, while five others will get commendations.