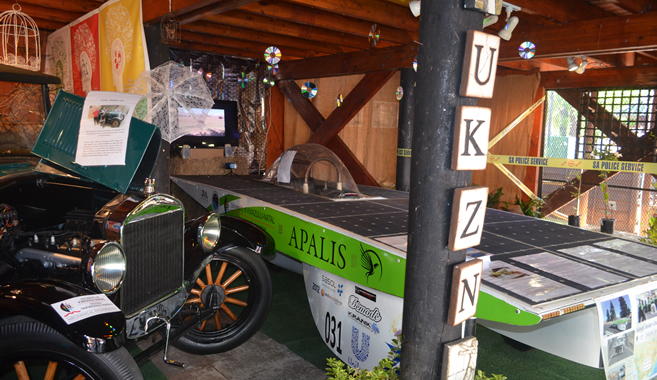 UKZN vehicles on exhibition at the 2015 Royal Show included a beautifully restored 1926 Model T, and at the other end of the transportation spectrum, the futuristic Solar Car, Apalis.

UKZN’s College of Agriculture, Engineering and Science (CAES) once again showcased what it has to offer at Pietermaritzburg’s annual Royal Show.

The College has for a number of years exhibited enormously popular stands for which it has consistently won recognition.

This year, the Discipline of Mechanical Engineering seized the opportunity to display two of their vehicles at the stand, in order to illustrate transportation progression through the ages, and to showcase work done in Engineering education at UKZN.

The aim of their display was to highlight the contrast in the technology used to design and produce vintage vehicles against the highly computerised design methods currently available to the final-year students in Mechanical Engineering at UKZN.

The advancement of the technologies used in the development of the vehicles are taught to students during their four year degree.  Such technologies include the use of 3D simulation, CNC manufacturing and the use of modern materials for high strength and low weight applications.

Representing the past, a beautifully restored 1926 Model T was on display.  Academic Leader of Mechanical Engineering at UKZN, Professor Glen Bright, appointed a team consisting of academic and support staff under the leadership of Mr Shaniel Davrajh, to work on the full restoration of the Model T in December 2014. The restoration involved an overhaul of the engine valves and cylinder head as well as the complete stripping, preparation and spraying of the vehicle’s body panels. The convertible roof and floorboards were also restored.

Representing the future was UKZN’s Solar Car, Apalis.  This 2012 design made by final year Engineering students, and its successor Iklwa, represent design efficiency and promote green energy for the future.  These cars are rich in local skill and creativity.  Both UKZN cars beat all local competitors in the 2012 and 2014 South African Solar Challenges respectively.

UKZN’s team of talented Engineering lecturers and students have entered the World Solar Challenge happening in Australia in October 2015.  Their hopes hang on ‘Hulamin’, their latest, improved design.

One further guaranteed draw card at the 2015 UKZN Royal Show stand were the interactive street science shows provided by STEC@UKZN, which is UKZN’s very own Science Centre.  This year a new attraction was added, namely, the dynamic and lively dancer’s from Pietermaritzburg campus’s Drama department.

UKZN’s stand also featured study information options, with enthusiastic staff and students on hand to answer questions from the public.