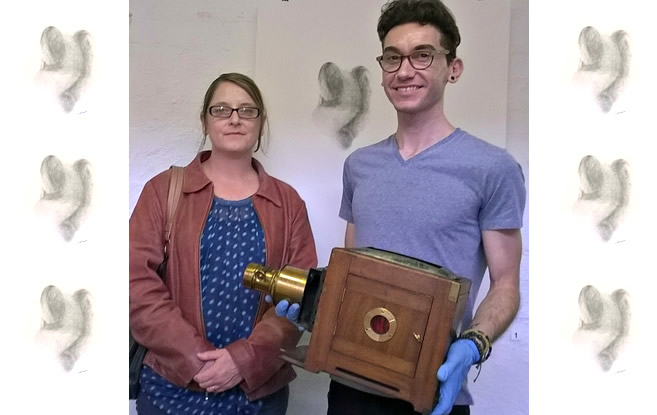 The term "magic lantern" comes from the ghostly quality of the projected images and the fact that at the time the general public (many of whom were illiterate) believed that the device was capable of channelling the supernatural.

Flanagan, now employed at the KwaZulu-Natal Museum unearthed this and other pre-cinematic devices and silver tint glass plate images from museum archives which is seen as a rare collection.

UKZN Digital Arts lecturer Ms Michelle Stewart said, ‘This collection has significant relevance to the UKZN Digital Arts syllabus. The demonstration was fascinating and marked the beginning of what promises to be a valuable collaboration between Digital Arts and the Natal Museum.’

Upon UKZN’s introduction of Digital Art into its course, Flanagan was attracted to the newness of it and its unlimited link to digital media, believing it opened one’s mind to endless possibilities.

‘The Digital Arts students seemed fascinated and intrigued by the magic lantern and its projections, although some didn’t seem too impressed - probably because it wasn’t HD quality but what can you expect from a 150 year old projector.’

He also feels that not enough emphasis is placed on the Arts in the country believing it's worse in KZN. ‘Art is one of the earliest ways of storing and transmitting information (think of rock art) people forget that it is the repository of culture and has a social function in societies. Contemporary art is often a social barometer in society, it reflects what is going on around the artist – people need to pay more attention to its importance.’