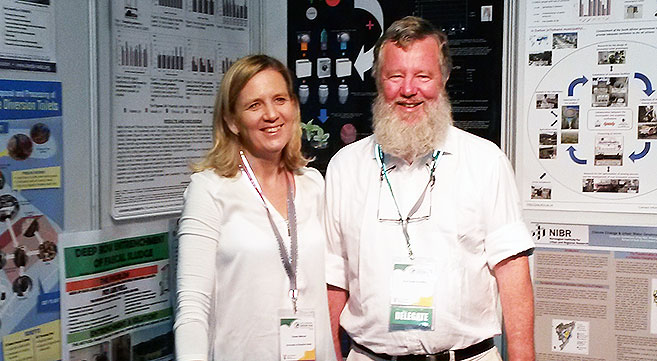 The Pollution Research Group (PRG), a professional research centre based at UKZN’s School of Engineering, took part in and made inputs at Durban’s National Sanitation Indaba at the iNkosi Albert Luthuli International Convention Centre in Durban.

The PRG contributed to the debate about alternative solutions to sanitation in order to enable the provision of safe, reliable and decent sanitation as a means to restore the dignity of many South Africans without access to such services.

Themed: It's Not All About Flushing, the Indaba was attended by representatives from government, water authorities, business, non-governmental organisations (NGOs) and research and innovation institutions.

The issue of providing adequate sanitation to citizens is a priority in the national governmental sphere, with high profile people such as the Deputy President, Mr Cyril Ramaphosa, and the Minister of Water and Sanitation, Ms Nomvula Mokonyane, emphasising the importance of the issue at the Indaba.

The PRG, which conducts innovative research projects on water resources, waste water reclamation, the impact of effluents on local environments, sanitation systems and other water related environmental issues, has already set benchmarks in the field of sanitation research. The PRG works closely with the Water and Sanitation Unit (EWS) within the eThekwini Municipality, making its research relevant and accessible to policy-makers and officials to improve service delivery.

Durban, thanks to its collaboration with groups such as the PRG, has already been recognised for its eco-friendly approach to sanitation and commitment to service delivery in this field, having been awarded the 2014 Stockholm Industry Water Award. With the PRG and Swiss aquatic research institute, Eawag, leading the project, the city has been investigating the use of faecal sludge in fertilisers and the recovery of water from urine as part of its Re-invent the Toilet Challenge.

The PRG also receives funding from the Bill & Melinda Gates Foundation (BMGF), with the most recent capacity grant from the foundation enabling it to provide support to other grantees and sanitation practitioners in faecal sludge management.

At the Indaba, EWS and the PRG, together with other research groups within UKZN, showcased the work being carried out in the sanitation field through the use of posters and booklets.

A site visit to the Newlands Mashu Research Facility was also undertaken. This site is one that has been developed by several partners - EWS, South African Water Research Commission (WRC), Bremen Overseas Research Organisation (BORDA) and UKZN - to enable the piloting of on-site wastewater treatment systems and agricultural research.

The PRG’s involvement in the Indaba allowed postgraduate students the opportunity to be involved in the exhibitions and site visits held during the event.

The outcomes of the Indaba were covered by the Minister of Water and Sanitation, Ms Mokonyane during her Budget Vote for her Department in Parliament recently. Her presentation covered plans for the management of water resources by government as well as plans for delivery of sanitation services.

Speaking about the Indaba and the importance of the topic, Professor Chris Buckley of the PRG said ‘The current drought in KZN and the prospect of water shortages in the future illustrates the need for rethinking our approach to sanitation.’

To encourage innovative thought about how individuals use water in sanitation systems, Buckley posed the question: ‘How would your toilet and downstream system perform in the absence of water?’