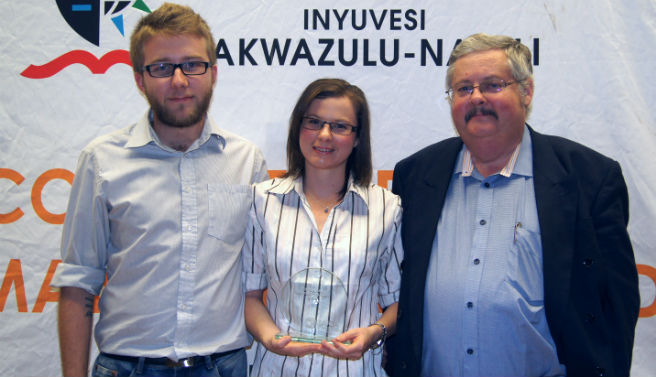 The School of Accounting, Economics and Finance recently hosted an awards ceremony in partnership with the South African Institute of Chartered Accountants (SAICA) to celebrate its top achievers.

The annual event, held on the Westville campus, recognises and rewards outstanding students within the accounting discipline and also provides an opportunity for accounting firms to interact with students to discuss employment opportunities.

Deputy Vice-Chancellor and Head of the College, Professor John Mubangizi described the ceremony as a celebration of excellence, which would not be possible without the students’ hard work and the support of the parents and staff who have been at their side every step of the way. He encouraged the students to go out there and not only be ambassadors for UKZN but show the world the outstanding quality of education that they have received from the Schools SAICA approved Accounting programmes.

The Dean and Head of the School, Professor Anesh Singh, gave an inspirational talk about the power of positive thinking and encouraged students to be prepared to face life’s challenges head on.

The Co-ordinator of the Accounting Programmes, UKZN academic Professor Philip Stegen, applauded the students and staff on their hard work, which saw aspirant Chartered Accountants from UKZN achieve an outstanding 87% pass rate at the SAICA Initial Test of Competence (ITC) examination surpassing the national pass rate of 76% and putting them in a tie for fifth place out of 14 universities.

Stegen attributed the achievement to dedicated staff and students and the success of various interventions which have been adopted to improve the throughputs.

The implementation of various interventions in earlier years resulted in the pass rate in final year going up by 20% in 2014 and improving in nine of the 12 modules offered by Accounting. The present final year class of 2015 are the first class to benefit from the introduction  of Auditing 200 and MAF 200 and the various interventions that we have adopted to improve throughputs, so we are looking forward to even a bigger improvement in 2015,’ he said.

Speaking on behalf of the SAICA, Eastern Region, and the President Mr Bradley van Dyk congratulated the students, staff and parents on their achievement. He reinforced SAICA’s commitment to ensuring that its partnership with UKZN results in them reaching their goal of achieving a level one ranking for the University’s accounting programmes.

‘I feel very honoured to have received such awards and these awards have motivated me even further to continue with the hard work and dedication during my honours year. Whilst the achievements highlight the dedication to my studies, I do however need to acknowledge the amazing support I have received from my dad and family as well as the lecture staff who assisted me to persevere and maintain a high standard throughout my studies,’ she said.

Prizes were sponsored by SAICA and accounting firms Grant Thornton, PWC, Deloitte, KPMG and EY. ABSA which sponsored the event utilised the awards ceremony to engage with students on employment opportunities. Farida Lavengee and Carol Ahern organised the event.