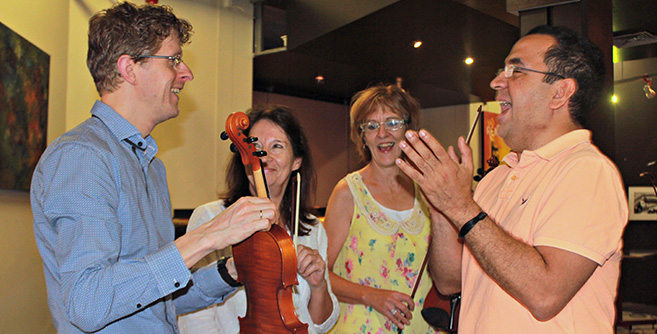 Renowned musician Eddy Marcano (right) with violinists at the UKZN’s Centre for Jazz and Popular Music.

Violinists of all levels attended the Unisa Music Foundation’s symposiums that were also presented in Pretoria, Bloemfontein and Cape Town.

Classical musician and master of South American styles, Eddy Marcano of Venezuela, and jazz and gypsy specialist, Tim Kliphuis of Holland, gave constructive critiques and advice to the violinists.

Marcano is the Conductor of the Simón Bolivar Symphony Orchestra in Caracas, Venezuela.

Local musicians who led the sessions included Louis van der Watt, members of the Odeion String Quartet and violinists from Durban and Johannesburg.

The symposium consisted of workshops and master classes on violin technique, styles, repertoire and improvisation.

Mr Alet Venter of Unisa’s Music Foundation said: ‘Following the Unisa National Saxophone Symposium in 2014 and the violin symposium this year, we plan to present symposiums for other instruments. Currently, we are giving lessons and music instruments to about 1200 disadvantaged learners, who also get the chance to play in orchestras.’

The Unisa Violin Symposium in Durban ended with a concert featuring Kliphuis and Marcano at UKZN’s Centre for Jazz and Popular Music.