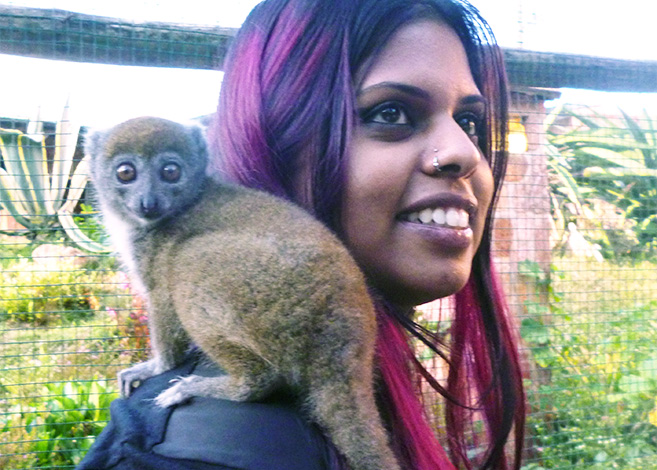 Ms Samantha Naidoo with a lemur at the conference venue in Madagascar.

Naidoo’s presentation was delivered on the topic of the effect of pollutant exposure on detoxification organs in an urban adapter, the Banana Bat, foraging at wastewater treatment works. The presentation included the results of Naidoo’s PhD research.

Delegates commended Naidoo on the originality of her research and responded well to her presentation. Naidoo hopes the experience of attending and presenting may give rise to opportunities for collaboration.

‘It was a great privilege to interact with esteemed researchers from around the globe; the academic legends that inspire students to begin their own postgraduate journey,’ said Naidoo. ‘I also had the chance to interact with students from other countries/ continents and well as representatives from renowned labs, including the Max Planck Institute.’

The experience of visiting Madagascar and representing her country on an international platform where she showcased cutting-edge research was also special for Naidoo.

‘Visiting Madagascar, with its amazing fauna and flora is a magical opportunity for any biologist, but attending the ASMS 2015 has been a really wonderful and enriching experience for me professionally. It has also been pivotal to the future growth of my studies and post-doctoral career.’

Speaking of her love for bats, Naidoo explained the importance of studies like hers for the animals.

‘In addition to their amazing adaptations such as true flight and echolocation, these top predators are the perfect mammalian model to study pollutant transmission, yet there’s a major paucity of bat pollution studies. I based my Honours degree project on this topic and the interesting results have since resulted in me expanding the research into various avenues, leading to a PhD study.”

The research she is undertaking is multidisciplinary in nature, and has thus produced results pertinent to various levels of the system involved in the results of pollution on small mammals.

Naidoo’s supervisor, Dr Corrie Schoeman, described the significance of the research produced by his student in a larger context.

‘Her research is highly significant in the context of increasing urbanization. It provides evidence that waste water treatment works, that are aimed to remove pollutants from the environment, can themselves act as a source of contamination and pose a threat to many organisms, including humans, exploiting these habitats,’ said Schoeman.

Naidoo hopes her research will highlight the consequences of urbanization and its associated anthropogenic pollution, for natural ecosystems and the environment.

‘Understanding physiological responses of this mammalian group to pollutants should also provide important guidelines for studying similar responses in humans. This is especially important, for instance, in rural communities using rivers which receive wastewater effluent.’

Naidoo hopes to continue further research into the physiological impacts of anthropogenic pollution through avenues such as post-doctoral fellowships.

Schoeman praised his student’s aptitude for research, saying: ‘Samantha Naidoo is an outstanding PhD student, who has consistently shown the potential to blossom into a great scientist. She is exceptionally dedicated and passionate about her work, and is always willing to go beyond the call of duty to succeed.

Naidoo thanked Schoeman and her co-supervisor, Dr Dalene Vosloo, for the role they played in taking her research from aims and objectives to results. She thanked Schoeman for teaching her that the essence of good science and its communication lie in a combination of scientific rigour, intellectual creativity and a passion for one’s subject of interest.

She also thanked her parents for their love and constant support during her postgraduate studies.