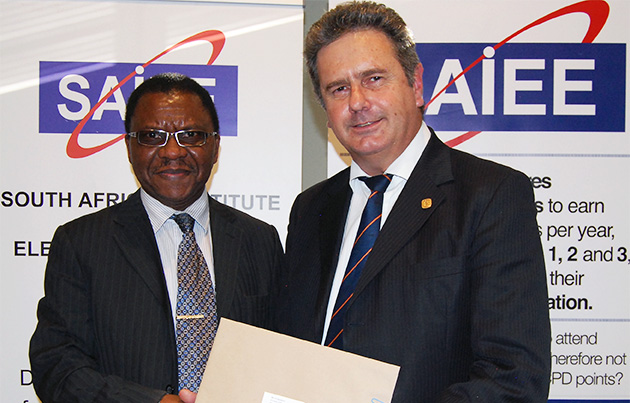 UKZN academic made Fellow of the SA Institute of Electrical Engineers

Dr Inno Davidson of the School of Engineering at UKZN was recently made a Fellow of the South African Institute of Electrical Engineers (SAIEE).

The SAIEE has around 6000 members, all professional electrical and electronic engineers involved in a range of professional activities from academic research to power infrastructural services.

Members are encouraged to make meaningful contributions to society’s quality of life and the advancement of technology. The SAIEE works closely with the Engineering Council of South Africa and members’ work is recognised globally.

Davidson has moved through the SAIEE’s classes of membership, and earned the election to Fellow after holding the position as senior member from 2002 to 2015, during which time his activity in his work as an applied scientist and technical consultant qualified him for this rank. His promotion to Fellow acknowledges Davidson’s superior responsibility and leadership in electrical engineering as well as his contributions in the field. According to Davidson, the Fellowship is a life-long professional designation based on continued delivery of exceptional value to the profession.

‘Professional recognition as a leader in your field or discipline places upon anyone a new sense of duty,’ said Davidson. ‘For example, it obligates me to take on more mentoring of young engineers at all levels in the institute and continued participation in SAIEE activities at all levels, including serving the Council from time to time when called upon.’

Davidson has 27 years of professional experience blending university teaching and research, with industry and consulting. He is the author/co-author of more than 100 peer-refereed journal/conference papers, scientific articles and technical reports.

Davidson was Senior Lecturer at the University of Pretoria in 1999 and joined the then University of Natal in 2001 as a Senior Lecturer, before moving with his wife and three children to Canada in 2005 on sabbatical leave, to work as a visiting professor at Powertech Labs Inc., which is a leading consortium in clean energy technologies, independent testing services, power system solutions, and smart utility services.

Davidson’s career also included time as an energy consultant in Vancouver in Canada implementing energy efficiency measures, as well as taking time to study Sustainable Energy Management at the British Columbia Institute of Technology in Burnaby in 2011.

Davidson also held the position of Associate Professor at the Faculty of Engineering and Information Technology at the University of Namibia, where he established a multi-disciplinary research centre focused on applied scientific research, while teaching in Electrical Engineering. Davidson returned to UKZN in January 2014 to take up a post at the Eskom Centre of Excellence (CoE) - which also serves as the Eskom Power Plant Engineering Institute (EPPEI) Specialisation Centre at the High Voltage Direct Current (HVDC) Engineering HVDC/Smart Grid Research Centre - as well as teaching in Electrical Engineering.

Davidson has already won accolades for his position in the Centre of Excellence, with his elevation to SAIEE Fellow earning UKZN, the CoE and Davidson congratulations from senior management and board members of Eskom. This has strengthened Davidson’s international status and capacity to enter into collaborations, partnerships, and research teams with other professors and experts from leading institutes and institutions in the United States, the United Kingdom and Africa.

‘This recognition has already elevated my international status,’ explained Davidson. ‘I have just returned from the Clemson University Power Engineering Conference in the USA, where I was initially scheduled to only present a technical paper, but by virtue of this development, I was invited to serve as a Panel Member on the Global Smart Grid Education Forum, as a recognised leader in Smart Education in South Africa.

‘My present position offers me the opportunity to provide strategic leadership in research and technology development, and to rebuild the Centre of Excellence, and mould it into a high-performance research team,’ said Davidson. ‘I am able to meet, talk with industry research leaders, equipment manufacturers, utility engineers, leading academics and researchers from all over the world and exchange ideas. That element of change and innovation keeps me excited, delighted and ignited about my work.

‘As an academic staff member of the University and the Electrical, Electronic & Computer Engineering discipline, this recognition adds value to the strength, depth and capacity of our teaching staff team, more so as our undergraduate degree programme undergoes accreditation by the Engineering Council of South Africa (ECSA) later this year,’ added Davidson.