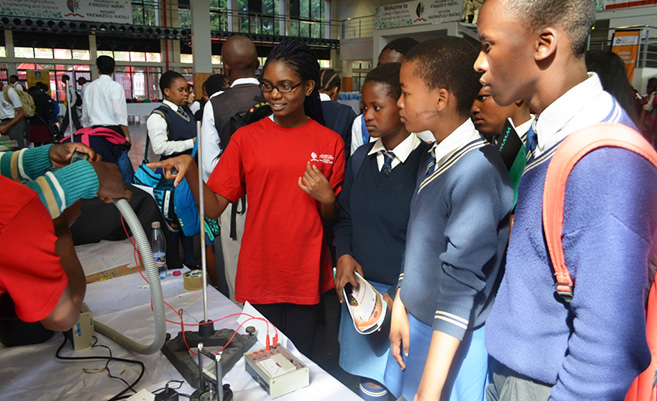 More than 2 000 pupils from schools in the eThekwini Metro attended the Science, Technology, Engineering and Maths (STEM) Careers Symposium on the Edgewood campus.

The symposium was organised by the Human Settlements, Engineering and Ethekwini Transport Authority and Trading Cluster: Support Services in collaboration with UKZN’s College of Agriculture, Engineering and Science (CAES).

The cluster was created to groom future engineers by identifying and managing the various STEM programmes for disadvantaged schools in the Ethekwini Municipality region.

Learners from a wide variety of schools were transported by the Ethekwini Municipality to the Edgewood campus for the official opening which featured speakers from the eThekwini Municipality, the Department of Education (DOE) and UKZN, who outlined the background, purpose and vision of the Careers Week.

Said Govender: ‘I was glad to see emphasis placed on the importance of mathematics and Science as career choices.  The positive response to the science demonstrations by the learners, educators and officials clearly indicates that science can be cool, fun and intellectually stimulating.’

After the formal programme the learners were given time to visit the exhibits and interact with UKZN staff and students, drawn from the various Schools within the College of Agriculture, Engineering and Science.