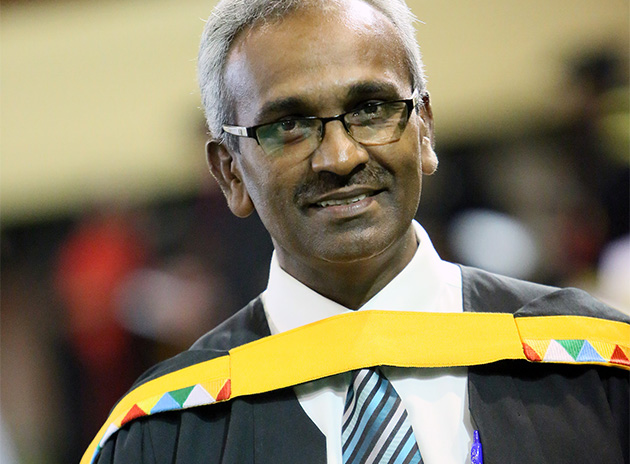 His thesis was titled: “Line Manager’s Perceptions of their Role in Disciplinary Matters at the University of KwaZulu-Natal.”

Singarum believes the way an organisation manages relationships with its employees is key to its overall success.

‘Line managers are not necessarily skilled and experienced in the field of labour relations and errors in managing disciplinary matters could lead to serious disputes if they are not handled in terms of the requirements of the Labour Relations Act,’ said Singarum. ‘This could ultimately be costly in terms of time and money, not to mention the negative impact on the performance of employees and the University’s reputation as an employer of choice.’

Studying for his masters degree meant Singarum had to juggle his time between work, family, community involvement and sports. ‘I’m also a serious marathon runner having completed 21 Comrades Marathons and many other marathons and half marathons such  the Two Oceans Marathon, which have all given me added encouragement in pursuing this degree.’

A dedicated Christian, Singarum’s faith ‘helps me persevere despite my challenges, be it in my studies, family life, community work or marathon running’.

Singarum, who has worked at the University for more than 30 years, recently joined the University’s Council, where he represents Support staff. He is currently working in UKZN’s Forensics Services division.

He thanked all those who supported him during his studies and acknowledged UKZN’s role in completing his degree. ‘I’m grateful to the University for giving me the opportunity to achieve this qualification and I look forward to making a meaningful contribution to the success of UKZN.’