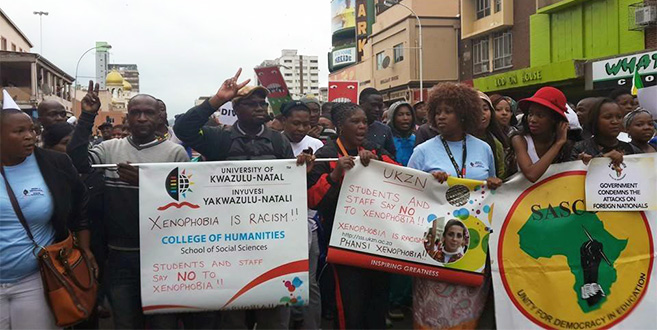 UKZN Chancellor, Dr Zweli Mkhize, staff and students joined a march that began at Curries Fountain to show solidarity against the recent xenophobic violence which ravaged KwaZulu-Natal and other parts of the South Africa.

The University, in conjunction with its SRC, arranged for buses to transport staff and students to join the march to display their sympathy.

UKZN academic Mr Lubna Nadvi said: ‘It is essential that members of the academic fraternity are actively engaged in critical social justice issues, and speak out against the xenophobic violence unfolding in our midst. While we can teach grand theories and ideas in our lecture halls, the reality is that not far from our classrooms, people are being attacked and murdered just because they are citizens of another country. We cannot remain silent in the face of such unacceptable tragedy that is wreaking havoc in our communities.’

UKZN’s Pietermaritzburg campus hosted a #SayNoToXenophobia demonstration, while College of Health Sciences staff and students, together with representatives of  Gift of the Givers and the South African Medical Association, provided free healthcare services at three refugee camps in Phoenix, Chatsworth and  Verulam.

As a South African higher education institution whose vision is to be the Premier University of African Scholarship, the University believes the community needs to collectively rally against such abhorrent crimes against humanity.

In a statement issued earlier, Vice-Chancellor and Principal, Dr Albert van Jaarsveld, urged academics and students to don their academic regalia to show their support. He said: ‘The University condemns in the strongest possible terms the harm caused to foreign-nationals living and working in our country.’