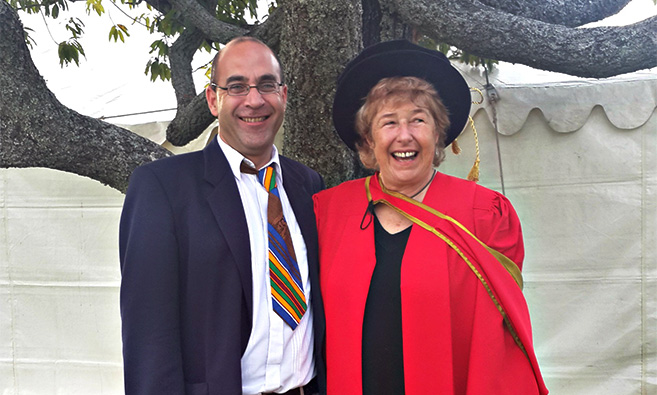 UKZN’s Professor Frances Lund (right) with the Director of the Institute for Social and Economic Research, Professor Robert van Niekerk.

Professor Frances Lund of the School of Built Environment and Development Studies (BEDS) has been awarded an Honorary Doctorate from Rhodes University in recognition of her work as a Social Policy Analyst and Welfare Activist.

‘It has been a great privilege to have been engaged in social policy research and implementation over a time of dramatic political transition, when the new government had ears to listen, and was thirsty for new ideas,’ said Lund.

In her address at the Rhodes graduation ceremony, she spoke about being asked in 1995 to chair a Committee - The Lund Committee of Enquiry into Child and Family Support - and also discussed the impact of the Child Support Grant.

‘This focus on pensions and grants led to my being asked to chair the Lund Committee in 1995. The late President Mandela had made his “First Call for Children” - a considerable part of the national budget was going to older people and those with disabilities with only a small fraction being allocated directly to children and families.

‘After considering other options, we recommended a child support grant - a small amount of cash to go every month to the primary care giver of children in poor households. It was a brave recommendation. The Cabinet accepted it the day it was tabled in 1996, and it was introduced in 1998. Today it is received by the primary care givers of about 11.5 million children, and the cash amount is R330 per qualifying child,’ said Lund.

‘A lot of research has been done on the impact of the grant with findings all pointing in the same direction - the grant contributes to improved health status of the children who receive it; it increases school enrolments; it leads to children staying a longer time in school, and together with the other grants (which are far larger than the Child Support Grant) it reduces the Gini coefficient - a measure of inequality in this most unequal society.’

Lund dispelled negative stereotypes and myths associated with the grants such as that the grant ‘causes’ teenage pregnancy, that it is the cause of ‘the population explosion’ as a whole, that the money is spent frivolously on cosmetics, and that grants generally make people lazy and ‘create dependency’.

‘Senior researcher Dr Monde Makiwane at the Human Sciences Research Council did an extensive search for evidence for the association between the grant and young teen pregnancy. He and his colleagues could find none. Yet the belief persists.

‘The fertility rate in South Africa has decreased since the grant was introduced, but the decrease was not ‘caused by’ the grant – it might have more to do with the HIV/AIDS, including the intensive education that has influenced sexual behaviour.

‘Do any of the grants create dependency? There is firm evidence from two large studies in different parts of the country that old age pension income – a much larger amount than the Child Support Grant - enables job search by younger household members, and assists in the setting up of micro-enterprises and job creation in the informal economy.

‘The South African Child Support Grant is often used as an example of “good practice”.  I am proud of having been associated with this policy intervention. It is blindingly clear that in cash-based societies, the lack of cash is a binding constraint, and the social grants have done and are doing important work.’

She thanked Rhodes University for the honorary doctorate which she treasured deeply.

Lund is a Senior Research Associate specialising in social policy. She is the Director of the Social Protection Programme of the global research and advocacy network, WIEGO - Women in Informal Employment: Globalizsing and Organizsing. Trained as a sociologist and social worker, she practised as a grassroots organiser in the fields of early childhood development and in urban infrastructural developmente, with a special interest in participatory research methods as an organising tool.

A longstanding research interest has been on the impact of South Africa’s pensions and grants in mitigating poverty and redressing inequality.

She is engaged locally and globally in research and policy advocacy around informal workers, especially regarding local government intervention, and the provision of social security, and occupational health and safety. An emerging research interest is in occupational health and safety for informal workers. She is a Research Associate at the Brooks World Poverty Institute, University of Manchester.