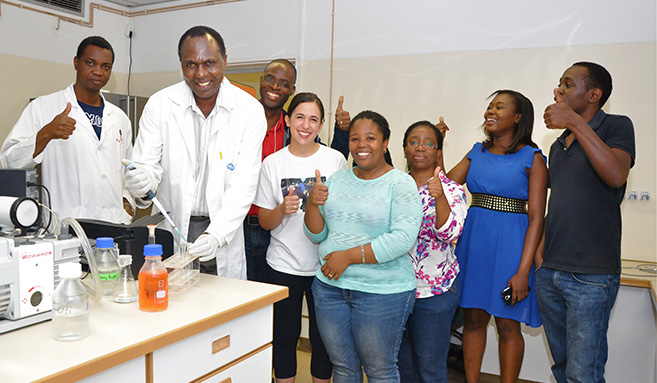 Dr Peter Owira with his group of students in the Pharmacology laboratory.

Various studies indicate that consumption of GFJ causes weight loss and reduces plasma cholesterol levels. ‘This is especially beneficial to patients with Type 2 Diabetes who need it the most as its chemical ingredients have metformin-like effects in blood glucose regulation,’ said Owira.

Owira’s study focused on the mechanisms by which GFJ lowers blood glucose levels in both Type 1 and Type 2 Diabetes treated rats.

The intriguing results indicated that treatment with GFJ either alone or in combination with insulin significantly (p < 0.05) reduced Fasting Blood Glucose (FBG) levels in diabetic rats. This suggests that GFJ just like insulin may be an inhibiting protein and lipid catabolism associated with insulin deficiency but did not affect the natural growth of non-diabetic rats.

The study also found that diabetic rats experienced polydipsia (extreme thirst) as determined by water consumption but treatment with GFJ alone or in combination with insulin significantly reduced water intake compared to non-treated diabetic rats, while insulin alone did not reduce water intake.

Owira said: ‘It may be possible that GFJ or some of its bioactive chemical constituents are protective against polydipsia in a diabetic state.’

However, the study found that glucokinase activity was significantly elevated in diabetic rats treated with both GFJ and insulin compared to those treated with GFJ only, suggesting that GFJ or its bioactive chemical constituents requires insulin in the modulation of glucokinase activity.  Hence, GFJ is unable to stimulate the production of insulin like metformin but does require insulin in the regulation of glucose homeostasis.

Owira’s study concluded that GFJ may be beneficial to Type 2 diabetic patients as opposed to those with Type 1 diabetes. The study also found that GFJ prevents hepatic gluconeogenesis (GFJ inhibits key enzymes that produce glucose in the liver) which is the main cause of hyperglycemia in diabetes.

He thanked UKZN Pharmacy students who formed part of the study as well as the South Africa Medical Research Council for funding the study which was recently published in the peer-reviewed journal, European Journal of Nutrition.

Masters of Pharmacy graduate, Ms Julia Hayangah, who worked on the study said: ‘Being involved with this project I got to learn so much. When I started doing the project my knowledge on grapefruit was very superficial. Now I have a greater understanding on the health benefits of grapefruit consumption. I loved working on this project even though it was a lot of hard work. I had to be on campus every day because the animals were treated twice a day, the water requirements were quite high and the bedding had to be changed because diabetic animals urinate a lot.

‘The overall master’s studies revealed that grapefruit could have beneficial effects in ameliorating diabetic nephropathy.

‘Currently, I am a registered PHD student investigating the effects of grapefruit in ameliorating HIV associated nephropathy in streptozotocin induced diabetes. This is because a lot of HIV patients who are diabetic are at a greater risk of developing nephropathy.’