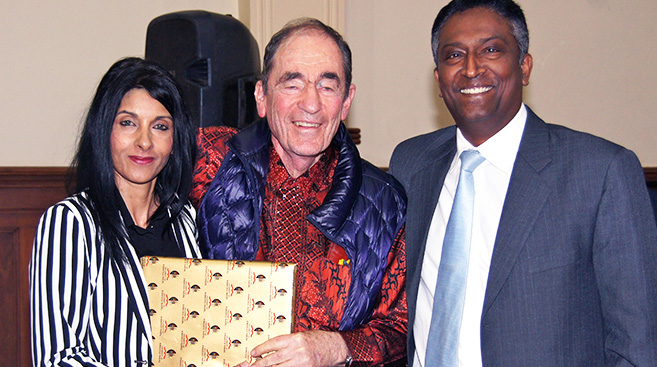 Albie Sachs urges South Africans to use the values of the constitution to build a just society.

Struggle hero Albie Sachs has expressed his dismay about the recent violent xenophobic attacks, reminding local people that many Africans lost their lives because they opened their hearts and homes to South Africans during the liberation struggle.

‘Two Mozambicans died because of a bomb that was meant to kill me. They died because they were giving me a place to stay even though they knew they were going to be killed. So many countries in Africa paid a heavy price for the freedom we are enjoying today but now, South Africans are chasing them away,’ said Sachs.

Sachs was speaking at the 13th Annual Victoria and Griffiths Mxenge Lecture and School of Law Students Awards Ceremony on the Howard College campus. The Annual Lecture commemorates the significant role the Mxenges – who were both lawyers – played in the liberation struggle.

Introducing Sachs, School of Law academic, Professor Karthy Govender, spoke about how the liberation fighter worked tirelessly alongside the Mxenges in contributing to South Africa’s legal history. ‘Hence, this Lecture will encourage everyone to pause and think about the role they are playing to honour the memory of the Mxenges and realise the vision of our Constitution.’

In his address titled: “Is This the Country We Fought For?”,  Sachs listed xenophobia, Marikana, racism, corruption, crime and trade unions tearing themselves apart as social ills stripping away the moral fibre of the South Africa envisioned by himself and those who contributed to its Constitution.

Sachs also shared nostalgic memories of how freeing South Africa from the clutches of apartheid was a team effort achieved by ethical leaders whose duty was to fight for a free country where people’s rights were protected.

‘When I think about the Mxenges and what can be done in their honour, it’s all about the constitution. When we uphold the constitution we get a sense of being South African, it’s at the centre of the heart of being South African. We have a strong judiciary and this is the country we fought for but it is up to the people of that country to create the society people died for,’ he said.

Dean and Head: School of Law at UKZN, Professor Managay Reddi, hailed the Lecture as the annual highlight in the university’s Law calendar and expressed her appreciation to members of the judiciary and law firms for their support in ensuring that the event was always a  success,

The Lecture was followed by an awards ceremony which recognised law students’ achievements.

The following were among the ultra high performers recognised: