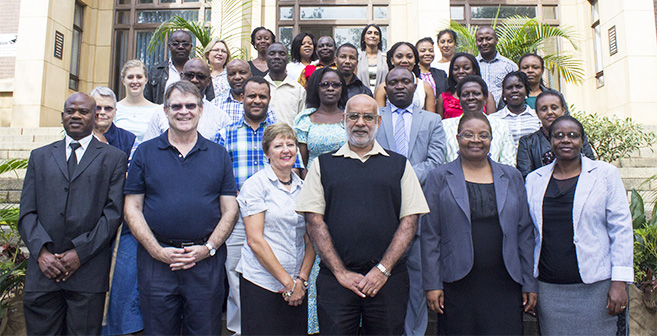 Staff of the College of Agriculture, Engineering and Science with representatives of AGRA and the students on the Masters Plant Breeding Programme.

The new Masters Programme in Plant Breeding in the School of Agricultural, Earth and Environmental Science (SAEES) was officially launched in the presence of representatives of the Alliance for a Green Revolution in Africa (AGRA), the College of Agriculture, Engineering and Science (CAES) and staff members of SAEES.

SAEES was selected to pioneer this programme to train plant breeders for Africa on the basis of its high concentration of plant breeders, and because of the success of the African Centre for Crop Improvement (ACCI), a centre in the School supported by AGRA, which has been training PhD students in plant breeding on a similar model for almost 13 years.

Professor Albert Modi, Dean and Head of SAEES where the programme is situated, opened the launch and congratulated the students for making it onto the programme.  Modi spoke about the significance of plant breeding in Africa and thanked AGRA for its work in ensuring food security on the continent in the context of the United Nations’ Millennium Development Goals, which it achieves by funding initiatives such as the Masters Plant Breeding Programme with the backing of the Bill and Melinda Gates Foundation (BMGF).

‘Africa must lead the charge in changing its own situation,’ emphasised Modi.

He also welcomed the Programme Officer for Education and Training at AGRA, Dr Rufaro Madakadze, and her two colleagues, Associate Programme Officers Ms Caroline Adala-Oremo and Ms Judith Naibei-Kembe. He remarked that the masters programme was in line with the University’s business plan in terms of colleagues in Schools and Colleges supporting one another.

Madakadze expressed confidence in UKZN, and highlighted the programme as being a response to the need for an approach in Africa that is intentional about problem-solving. She spoke about Africa’s varied agro-ecology and the need to produce unique solutions to challenges in each area, mentioning that, despite AGRA having trained and funded 800 people throughout the continent already, there was still a need for more skilled individuals whose impact on plant breeding in their countries could be measured.

She expressed hope that such programmes would increase capacity and train Africans in Africa to contribute to the public and private sectors.

Project manager for the programme, Professor John Derera, outlined the project and its aims of training a total of 30 industry-ready, modern plant breeders from at least six Southern African countries. According to the programme’s directives, the new breeders will impact positively on delivering the technology needs of the smallholder farming sector, which dominates agricultural production in Africa.

The programme is a collaboration between UKZN, AGRA, Makerere University in Uganda, Kwame Nkrumah University of Science and Technology in Ghana and Iowa State University in the United States, with teaching staff coming from SAEES, the US and other institutions in the region.

According to Derera, the teaching on the course will emphasise technical subjects as well as soft skills and teaching the students to work with people. Emphasis is placed on collaboration between the private sector and public sector, with representatives from each involved in the students’ training. Public entities such as the Agricultural Research Council (ARC) are involved in training the students and private companies like Pannar, Pioneer Seeds, Monsanto, Capstone Seeds and United Seeds will accept the students for the six-month internship portion of their programme.

Derera drew attention to the transdiciplinary nature of the programme, pointing out that staff from disciplines such as Food Security, Plant Pathology and Nutrition would be involved in lecturing the students.

The curriculum was developed in partnership with Iowa State University in the United States and includes application of modern teaching technologies and applied research to improve crop varieties.

Acting Dean of Research for CAES, Professor Theresa Coetzer, and Dean of Teaching and Learning, Professor Bala Pillay, spoke at the event. Coetzer emphasised the standard that had been set by SAEES in its work on food security and sustainable development that led to its selection by funders as the leading African university to pioneer this programme.

She referred to programmes the students would be involved in to contribute to their studies, including the Mastering Masters workshops if needed and trials at Cedara, the Ukulinga Research Farm and Jozini.

Pillay said the initiative fitted into the University’s objective of being a leading university for African scholarship and highlighted the institution’s commitment to the teaching and learning and holistic approach. He gave a vote of thanks to all involved and wished the students luck with their endeavours, saying he hoped the programme would contribute to understanding of and interest in plant breeding in Africa.

The event was attended by the ten students enrolled in the masters programme, who began their training three months ago. One of the students, Ms Mwila Chibanda, described some of the training the group had already benefited from, emphasising how vital it was for them to be equipped with the skills they needed to contribute to the production of more food in their countries in an effort to decrease malnutrition and increase income in the sector. ‘We are so fortunate to be at the receiving end of knowledge being passed on by professionals here,’ said Chibanda.

Chibanda, on behalf of her classmates, thanked AGRA for its support as well as UKZN for its facilities and staff, and promised to uphold the values of the institution in return for its hospitality and generosity.

The students are from Tanzania, Malawi, Mozambique, Zambia, Zimbabwe and South Africa.