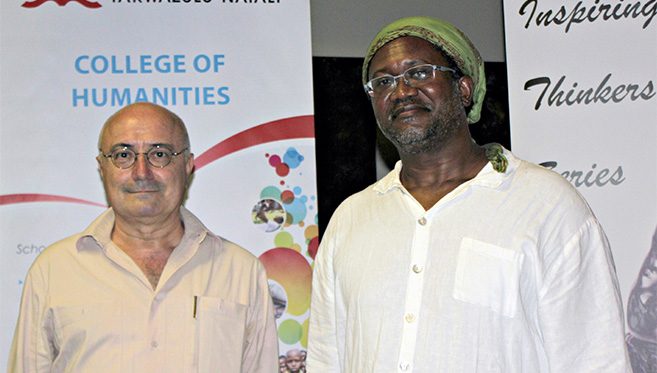 As part of the European Union’s Inspiring Thinkers Series, Italian  Musicologist Dr Marcello Lorrai was at UKZN’s Centre for Jazz and Popular Music (CJPM) to discuss the influence of the South African jazz diaspora in Europe since 1960.

Lorrai spoke about the Blue Notes jazz sextet, apartheid, exile and a new style of jazz in Europe during his presentation, offering audiences snippets of jazz compositions of influential jazz musicians in depicting the rise of prolific South African jazz.

He also highlighted Chris McGregor as the pioneering jazz pianist of the famed South African jazz band the Blue Notes and exiled band leader of the dynamic and innovative Brotherhood of Breath.

He noted various historical aspects of the band, including their rise to fame, their music and musical contributions, their exile during apartheid, their subsequent deaths and musical tributes made in honour of them.

Lorrai believes they are now considered one of the great free jazz bands of their era, whose music was given a unique flavour by their integration of African styles, such as Kwela, into the progressive jazz ideas of the time.

‘The South African music diaspora is now arranged for a younger generation but Europe continues to still be influenced by the South African Jazz contributions. The Blue Notes jazz elements are still present today in European Jazz.

UKZN Music lecturer Mr Neil Gonsalves said: ‘It was a pleasure to host Dr Lorrai as part of the EU Inspirational Thinkers series, especially on a topic as vital as his in understanding the importance and impact of South African jazz in Europe.’