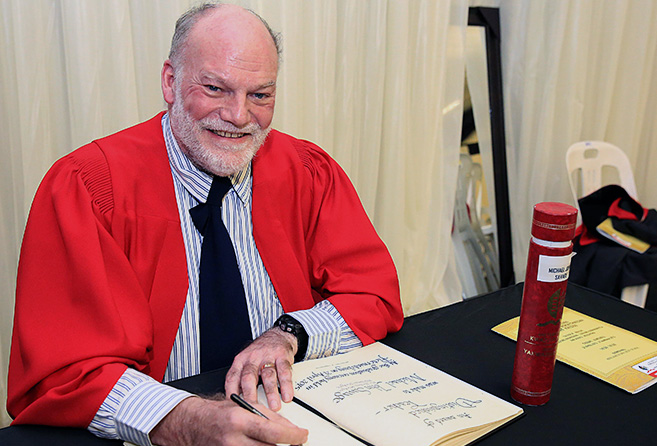 Professor Michael Savage was presented with a Distinguished Teacher Award for excellence in teaching and learning.

Professor Michael Savage of the discipline of Agrometeorology has been awarded a Distinguished Teacher’s Award (DTA) for 2014 in recognition of his excellence in Teaching and Learning.

Savage is one of the longest-standing academic staff members in the School of Agricultural, Earth and Environmental Sciences (SAEES) on the Pietermaritzburg campus, starting in the discipline of Agrometeorology in 1977 and being responsible for the development of all course content on the subject since then.

A stalwart of the School and a dedicated teacher who is passionate about seeing progress in the science of the discipline as well as in his students' knowledge, Savage emphasised that, in the teaching process, it was vital to get to the students' level to help them understand.

‘Teaching is the one part of my overall range of activities that has never received formal recognition,’ he said. ‘Now, besides the research and administration contributions, there is also recognition for teaching and this can only bode well for the future of the discipline. Hopefully, the award will stimulate others to also work towards research on teaching and learning in their disciplines.’

Savage also made history as the first recipient of UKZN’s Doctor of Science in Agriculture degree in 2010 - the only previous DScAgric degree in the University’s history was awarded in 1998 at the former University of Natal.

After 37 years at the University, Savage remains enthusiastic and passionate about his subject and still pursues innovative research, such as the nowcasting for frost and other conditions emerging from his work on the Agrometeorological Instrumentation Mast (AIM) system. The AIM system showcases Savage’s innovative adoption of technology in his teaching practices through the development of the Automatic Weather System (AWS) Current site.

The site features real-time data uploaded from weather stations around campus and allows students to download the data to inform their studies.

Savage, recognised as a pioneer in some of his teaching methods, has determined that, in a country where so many languages converge, the concept of mobile learning has become important, and so has placed emphasis on creating recognisable icons which allow students to learn by associating images with meaning.

This is particularly important in a discipline which deals with meteorological occurrences which are invisible, such as greenhouse gases and infrared radiation, and must be explained carefully. This visual literacy is demonstrated in his teaching system, which has produced four published papers, with the first international paper on the topic being accepted recently for publication in the International Journal of Biometeorology.

As evidenced by the receipt of the DTA, Savage has made considerable contributions to the process of Teaching and Learning. He is motivated by his students getting something out of their learning experience, and has even initiated a study on the viability of the creation of a Zulu dictionary to create Zulu terms for those used in English in Agrometeorology. The study has been done with his students' contributions as to what words they think could be used to best describe scientific terms. This has proved to be challenging and ultimately needs to be developed by a language expert.

Savage's interest in mobile learning has also resulted in all students having a better understanding of Agrometeorology through images. He is keen to see scientific societies contribute to the creation of technical dictionaries in traditional African languages so that knowledge can be transferred equally.

Savage and his colleagues have found that many students entering second year courses in Agrometeorology are seriously lacking in basic computer skills, leading to a resourceful problem-solving approach in the discipline, whereby they have slotted an intensive computer literacy training element into their second-year practical sessions. There has since been a marked improvement in the students' skills. Savage has suggested that this kind of intensive computer literacy training at second-year level should take place across the University, having seen the difference it has made to his students' development and eventual marketability as employees.

He described his teaching approach as an empathetic one. He invests himself in his students and takes their differing backgrounds into account as he interacts with them directly.

Savage is a teacher whose primary goal is to see his students succeed.