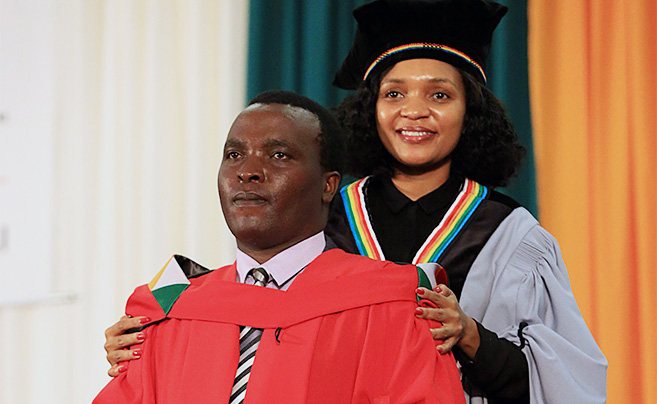 Dr Robert Mutwiri graduated with his PhD in Statistics in this week’s graduation ceremonies, with a thesis titled: Statistical Distributions and Modelling of GPS-Telemetry Elephant Movement Data Including the Effect of Covariates.

‘Statistics is a branch of mathematics that we encounter every day in our lives,’ said Mutwiri of his passion for the discipline. ‘Counting sticks or bottle tops when I was a child and in nursery school was actually one of the earliest motivating factors to my pursuit of statistics as a course of study.’

Mutwiri’s PhD research was aimed at investigating the appropriate statistical distributions and models for analysis of animal movement behavioral patterns from animal tracking GPS data, in particular for elephant movements. According to Mutwiri, the study showed that elephant movement frameworks could be described by the four parameter stable distribution model, which captures the animals’ heavy tails and skewness.

‘We further found that the data contains important biological signals that could be lost through data trimming,’ explained Mutwiri. ‘The study also revealed the potential of the circular regression models in describing the drivers of elephant movement.’

Mutwiri said his time at UKZN had been fruitful for his research, and that he had benefited from seminars and the guidance of colleagues and lecturers during the course of his studies. He made the most of research incentives at the institution and found that being at UKZN provided valuable opportunities to interact with international leaders in his field and attend conferences, which bolstered his research.

Having completed his PhD, Mutwiri hopes to apply his skills in the working world and will maximise the opportunity to spend more time with his family.

He thanked his supervisors Professor Henry Mwambi and Professor Rob Slotow for their invaluable input into his studies and for being his mentors in this field of study.