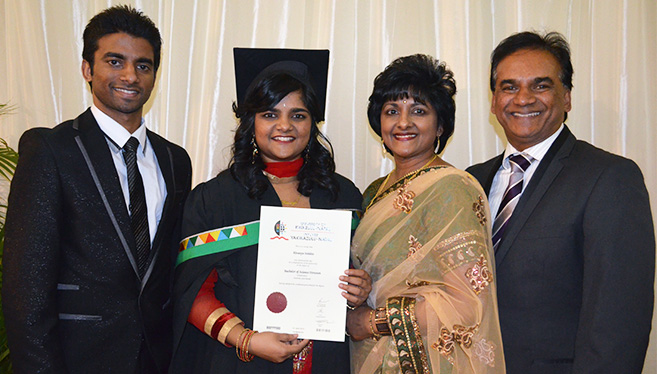 From an academically-orientated family, Naidoo said she was always motivated to do well and added to that she had a competitive nature which always pushed her to give of her very best.

Her mother, a lecturer in the School of Education at UKZN who completed her PhD in HIV/AIDS Education, had given Naidoo excellent advice on her Honours project, which was also in the HIV/AIDS field. Naidoo’s father is a principal of a primary school who completed his Masters in Education Leadership and Management, while Naidoo’s brother is completing his Masters in Hydrology at UKZN.

Naidoo says her family inspired her to study and do well, and played a huge part in moulding her into the person she is.  ‘I could never have done so well without my family - they are my motivation and role models,’ said Naidoo. ‘It’s the best feeling when you make your family proud.’

Naidoo also said that passion for her area of study drove her to do well. She chose to pursue her undergraduate studies in Statistics and Computer Science as she had always been fascinated by numbers.

‘I love Statistics because it relates to many fields such as education, science, government, medicine, finance and engineering. I remember my lecturer saying: “The best thing about being a statistician is that you get to play in everyone else’s backyard”. This captivated me throughout my studies.’

Speaking of her time at UKZN in the School of Mathematics, Statistics and Computer Science (SMSCS), Naidoo said studying at UKZN had been ‘an absolute pleasure’. She described how the lecturers she interacted with had transferred knowledge excellently, and also commented on the high calibre of students at UKZN.

‘I enjoyed the facilities available to students,’ added Naidoo. ‘I was on the tennis committee from first year so I’ve always been involved with sport at UKZN. I was able to have the perfect balance between studies and sport thanks to UKZN.’

In addition to being a keen tennis player she also took part in a squash league and enjoyed hiking, fishing, playing Sudoku, watching movies and going after any activity with a hint of adventure.

Naidoo is now working as an Asset Integrator (developer) at Derivco in Durban, a company specialising in Internet gaming and computer software suite development. Naidoo plans to continue working in fields related to Computer Science or Statistics, and after gaining some experience she hopes to return to her studies to complete either a Masters in Computer Science or a Master of Business Administration (MBA) degree.

Naidoo gave credit to her supervisors and lecturers at UKZN, saying that their contribution to her studies enabled her to achieve such excellent results.

‘Professor Henry Mwambi has also been a constant motivation. I admire his passion for Statistics and his efforts to expand the Statistics department,’ said Naidoo. ‘His enthusiasm rubs off onto everyone and he was one of the reasons I enjoyed my honours year.’