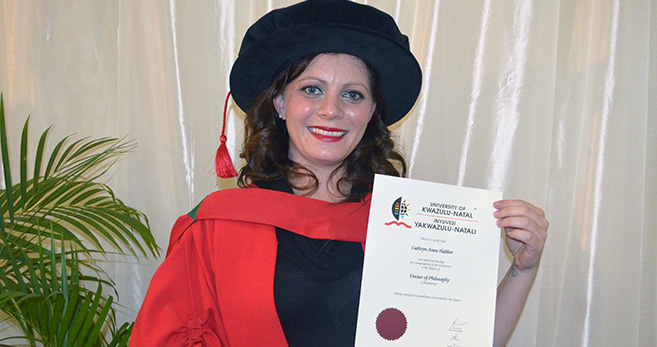 Dr Cathryn Slabber graduated with a PhD in Chemistry.

Dr Cathryn Slabber has graduated with a PhD in Chemistry with research seeking to develop a painkiller without side-effects common to many over the counter anti-inflammatories.

Slabber, who studied her BSc, Honours and Masters at UKZN, said she was drawn to the discipline of Chemistry because of the challenges it presents in solving numerous puzzles in the chemical field. Initially interested in genetics, having ridden ex-race horses throughout high school, Slabber said at school she was always the one interested in mixing chemicals in science classes.

The thought of science as a viable career path struck her while was watching the popular television show CSI: Crime Scene Investigation, leading her to register for a BSc at UKZN.

The research Slabber pursued for her PhD, titled: The War Against Pain: The Design, Synthesis and Testing of Potential COX-2 Selective Inhibitors, involved the use of a naturally-occurring compound as a base for designing a theoretical series of compounds, which were to target a specific isoform of a protein responsible for how pain is felt when using computational modelling techniques.

Slabber’s research was informed in part by the time she was able to spend in the United States at the Emory Institute for Drug Design (EIDD) at Emory University in Atlanta, Georgia, where she was exposed to innovative chemical work and different approaches to research.

‘It was a great experience and a real eye-opener, working in a First World research facility where everything is at your fingertips,’ said Slabber. ‘It also showed me that there are a few times where working in South Africa allows you to become a better research scientist. For example, in the US if you order chemicals today, the order will often be waiting for you tomorrow, whereas here, it can take up to six or more weeks. But you can’t just stop your work and wait for the chemicals to arrive, so you do lots more research and you experiment with whatever chemicals you have on hand, and often you find a set of conditions or chemicals which you would never have thought of if you had had the chemicals on hand to start with. Working like this, while frustrating at times, makes you think outside of the box a little more and this ability is vital to any research scientist.’

The time spent at EIDD sparked Slabber’s PhD work and gave her a novel focus in terms of South Africa’s research in this area.

‘At the EIDD, I was introduced to the possibility of targeting proteins using tailor-made compounds and the prospect of using computer programmes to design and evaluate compounds,’ explained Slabber. ‘I was also introduced to the naturally occurring compound which I would later base my own compounds on.’

Slabber hopes to see the compounds she isolated, or compounds based on her work, eventually become available on the market and do what they were designed to do.

Slabber hopes to continue with research now that she has her PhD, ideally to the level of producing a patented compound, and is currently looking at pursuing post-doctorate research opportunities either in South Africa or overseas. She said she enjoyed the freedom given to her at UKZN to explore different avenues in her research as they arose, and quipped that trips to the popular Kara Nicha’s near the Pietermaritzburg campus would remain a favourite memory from her time at the institution.

Slabber credited her supervisor, Dean and Head of UKZN’s School of Chemistry and Physics, Professor Ross Robinson, ‘for letting me go off and do my own thing’; Dr Dennis Liotta and Dr James Snyder and their research group at EIDD, and Emory University for introducing her to computational modelling and drug design; Craig Grimmer, Caryl Janse van Rensburg and the rest of the technical staff at UKZN for their invaluable help; and friends and family, ‘for keeping me sane through the challenge of completing my PhD’.