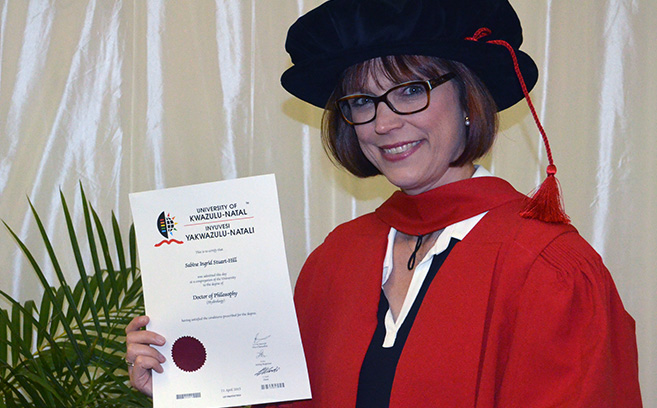 Dr Sabine Stuart-Hill graduated with a PhD in Hydrology.

A seven-year journey reached a successful conclusion for Dr Sabine Stuart-Hill when she graduated with a PhD in Hydrology.

Supervised by Professor Roland Schulze and Professor Claudia Pahl-Wostl, her thesis was titled: “Mainstreaming Adaptation to Climate Change into Decision Making in the Water Sector: Concepts and Case Studies from South Africa.”

Stuart-Hill, who has been a part of the Discipline of Hydrology as a lecturer in the School of Agricultural, Earth and Environmental Science (SAEES) since beginning her PhD in 2008, spent much of her life in Germany and studied her undergraduate degree at the University of Bonn, where she also went on to complete her masters.

Initially, Stuart-Hill, whose interests lie in sustainability and environmental science, wanted to do her undergraduate degree in the early 1990s in South Africa, a country where she also has roots. However, at the time, there were few opportunities to study in those fields in South Africa and no exchange programmes were on offer to enable her to work in both countries.

Stuart-Hill completed her undergraduate and masters degrees in Germany, with her masters focusing on flood mapping in the Rhine catchment area after floods devastated the area in a country which, while known for its systems and planning, is unused to natural disasters.

After completing her masters, Stuart-Hill chose to delay beginning a PhD as the experience of doing research with real-world results had stimulated her interest in working where she could have an impact on the uptake of science into policy and visible, daily actions. She spent a short while in the consulting field, before moving on to work for the German government where she ran a unit working on a European Union-funded programme focused on preventive flood management.

Stuart-Hill’s experience of how various countries in Europe approached issues of flood management sparked ideas for her PhD, which she describes as a journey of discovering issues pertinent to her research and devising ways to research those issues most fully.

Stuart-Hill had made contact with her supervisor Professor Schulze of UKZN through her work in Europe and through her co-supervisor, Professor Claudia Pahl-Wostl of the Institute for Environmental Systems Research in Osnabrück, Germany.

The supervision and co-supervision of Schulze and Pahl-Wostl provided Stuart-Hill with a spread in discussions and contacts, which enriched her work. She cited Schulze particularly as a knowledge broker in her work, and expressed gratitude to her supervisors for their crucial input and support.

For her PhD research, Stuart-Hill examined issues of climate change adaptive water management and water governance in South Africa, where changes in the catchment areas and subsequently in communities need to be investigated to modify how water is managed. She described how a sensitive hydrological cycle and responses in the country provide uncertainties which traditional modeling and projection practices cannot fully accommodate, and where there is insufficient data to base hydrological models and projections on.

Stuart-Hill was interested in basing her PhD on her foundations of interacting with governments and the people they serve, and exploring how to adapt to climate change and mainstream issues of water governance and changes in hydrological systems via participatory processes. Her background in project management, workshop facilitation, negotiations and communications greatly influenced and informed her work, giving her a different set of skills to apply to her research.

‘There is a need to be creative and innovative when dealing with these issues,’ said Stuart-Hill, ‘since water issues feed into every area of all of our lives.’

Her research has a transdisciplinary theme, presenting a challenge as most publishers still stick to traditional categories for the publication of papers. She has, however, worked on a number of papers to be published from her work and has also been invited to work on other projects as a result of her work, including two projects with the Water Research Commission (WRC) as part of their Water Governance Think Tank, and the National Research Foundation (NRF), the latter enabling her to send two UKZN masters students to Germany for part of their research.

She is a member of the Water Institute of Southern Africa (WISA) Management and Institutional Affairs Division committee championing the governance theme and since March 2013, a member of the Interim Steering Committee for the re-establishment of the South African Country Water Partnership. She is also coordinator for one of the six FETwater Phase III themes - Planning & Implementation.

FETwater is a training programme for the water sector financed and supported by the Sector Education and Training Authority (SETA), WRC, the Water Institute of Southern Africa (WISA) and the Department of Science and Technology (DST).

Involvement with other projects, the trans-disciplinary nature of her work and the fact that Stuart-Hill married and had two children while completing her PhD contributed to the time it took to finish the degree.

She found, however, that this gave her time to mature around her work, reading up on other disciplines’ forays into the field and ultimately being able to produce a cutting-edge dissertation.

‘This kind of work has really opened up a new theme in Hydrology; one which is people-based and is involved in bringing scientific results and hydrological maps to the people that they affect.’

She has enjoyed the support of her colleagues in SAEES during the completion of her PhD, who she says have understood the process of completing this work and have given her the space to do so.

Going forward, Stuart-Hill aims to build a research group around developing a decision-making process in water governance that is informed by processing and projections, that will contribute to water security and allow a water-scarce South Africa not simply to live on the boundary of exceeding bio-physical thresholds, but steer itself towards optimum management of its water resources.