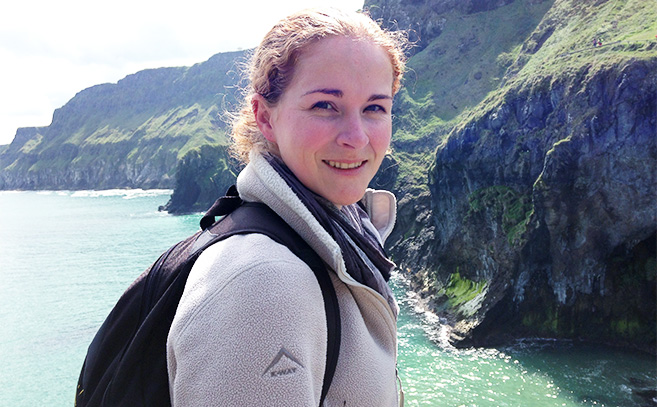 The evolution of wind pollination in proteas was the focus of Ms Megan Welsford’s Master of Science thesis in Ecological Sciences.

Masters Student Driven by Love for the Natural World

A desire to make a difference in the world combined with the knowledge that education is the gateway to change and opportunity, convinced Ms Megan Welsford to pursue her tertiary studies in the ecological sciences.

‘At the age of 11, I learned how humanity was destroying the natural world and the places wild animals called home, I knew I wanted to do anything I could to help,’ said Welsford.

It was her deep love and respect for the natural world and animals that led her to complete her Bachelor of Science and Honours degrees and further motivated her to continue with an MSc degree in Ecological Sciences, which she received at a graduation ceremony of UKZN’s College of Agriculture, Engineering and Science held in Pietermaritzburg.

Her research focused on the pollination of Leucadendron (Proteaceae), in particular, the evolutionary shift from insect to wind pollination in the genus.   She was supervised by Professor Steve Johnson, who holds the South African research chair in evolutionary biology, and Professor Jeremy Midgley.

‘I focused on pollination ecology for my MSc after I became fascinated by the interactions between plants and their pollinators,’ said Welsford.  ‘I have since learned that every single organism has an important, unique role to play in the environment.’

Welsford explained that not much experimental evidence was available to confirm wind pollination in the genus conclusively. Through exclusion experiments, which exclude insects but not wind-borne pollen from virgin flowers, Welsford determined that at least five species in the genus are wind-pollinated.

Welsford said she had been greatly inspired ‘by two strong, brave, intelligent and amazing women, that are no longer with us, but whom I deeply admire’.  The first of these is the American author and poet, Maya Angelou, ‘whose wisdom, activism and words touched my life immensely’. The second is Kenyan environmentalist, activist and Nobel Peace Prize winner, Wangari Maathai, ‘whose dedication to the environment and the courage to stand up for what is right have been my inspiration’.

One of the lessons learnt by Welsford while studying towards her masters degree was that research and academia, as with life, could be unpredictable and sometimes challenging.  Her  advice to other budding young scientists is, ‘to just keep doing your best, putting one foot in front of the other, never giving up and knowing that no matter what, everything will work out alright in the end’.

Welsford’s plans for the future are to engage with environmental organisations, governments, spiritual leaders and communities to work together to help build a future, ‘in which we look after and cherish our natural environment, instead of plundering and destroying it’.