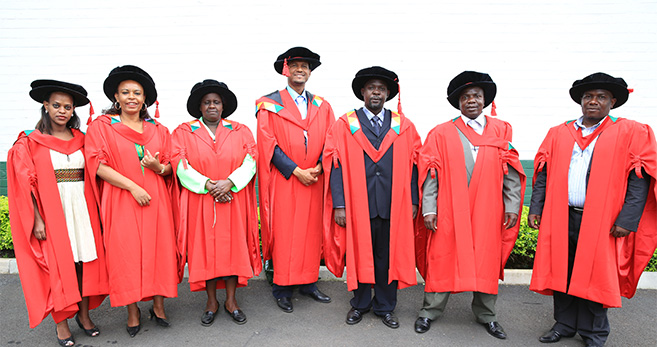 The latest crop of graduates from the African Centre for Crop Improvement (ACCI).

The African Centre for Crop Improvement (ACCI) at the School of Agricultural, Earth and Environmental Sciences (SAEES) at UKZN saw eight of its PhD students graduate with their Doctor of Philosophy in Plant Breeding at this year’s graduation ceremonies.

Each of the students who graduated, all from countries around Africa, focused on developing new varieties of the crops they each studied, and through the ACCI’s PhD training programme, were equipped with the skills they needed to investigate their crops and improve on their resilience in their home countries. This focus of the ACCI allows students to improve crops for an African environment in order to contribute towards improved Food Security in their home countries.

The graduates all spoke highly of the ACCI training programme, describing how the initial coursework element, undertaken at UKZN before they began fieldwork in the field in their home countries, enabled them to approach their research with the necessary tools to successfully complete their PhD. Many of the graduates are mid-career professionals, and spoke highly of the ACCI administrative support as well as their supervisors, who they said followed up with them diligently and visited them in the field to ensure that they had the assistance they needed to finish their degrees on time.

Dr Demissew Ababulgu, a plant breeder from the Ethiopian Institute for Agricultural Research (EIAR), completed his research on Genetic Diversity and Combining Ability of Selected Quality Protein Maize (QPM) Inbred Lines Adapted to the Highland Agro-Ecology of Ethiopia. His work has resulted in the publication of three papers, which he says was facilitated by the push the students received from the ACCI to have their work published.

Dr Asnakech Beyene, a plant pathologist researcher from the EIAR, completed her research on the topic of Genetic Analysis and Characterization of Faba Bean (Vicia faba) for Chocolate Spot (Botrytis fabae) Disease Resistance and Yield in the Ethiopian Highlands. Her research, which she hopes will contribute to the body of knowledge on this disease affecting a crop that it vital for Food Security in Ethiopia, provided information about the inheritance of diseases and yielded three publications, with seven more in the pipeline.

Dr Netsanet Hei, also a plant pathologist with the EIAR, completed her PhD on the topic of Genetic Analysis of Stem Rust Resistance among Ethiopian Grown Wheat Lines. The wheat crop is a vital crop in Ethiopia, and it is vital for the crop that varieties are developed that will ensure increased food security in the country. Hei has had one paper from her research published already, and hopes to work on releasing a disease-resistant cultivar as she continues in her plant breeding work.

Dr Geofrey Lubadde, a plant pathologist from the National Semi-Arid Resources Research Institute (NaSARRI) in Uganda, sought to diversify his qualifications and improve the crops he was working with in his home country. His research focused on Genetic Analysis and Improvement of Pearl Millet for Rust Resistance and Grain Yield in Uganda. Lubadde has produced one publication from his research so far, with another two accepted for publication, two that have yet to be submitted for publication and one book published, which focuses on the socio-economic aspect of growing pearl millet.

Dr Macpherson Matewele, a plant pathologist at the National Research Council of Malawi, focused his work on Diversity Analysis and Breeding for Maize Weevil (Sitophilus zeamais Motschulsky) and Larger Grain Borer (Prostephanus truncatus Horn) Resistance in Productive Maize Germplasm in Malawi, research aimed at breeding maize for resistance to pests. According to Matewele, there are not enough plant breeders in Malawi, a problem he aims to contribute to solving through acquiring this qualification. Matewele has been working on ten varieties, which are in their early stages but which he believes have potential to be adopted as cultivars in the future. He is planning to submit seven papers from his research, and spoke of the benefit the ACCI programme had been to him, particularly in teaching him to use tools for analysis, such as Biometry, an area in which he had some experience but had never fully explored.

Dr Jane Mbugua, an agronomist and research officer at the Kenya Agricultural Research Institute (KARI), completed her thesis on the topic of Development of High Yielding Potato (Solanum tuberosum L.) Genotypes with Resistance to Bacterial Wilt (Ralstonia solanacearum) for the Kenyan Highlands. Mbugua’s research produced a remarkable twelve published papers and a book chapter, and has contributed to what she sees as her career progression as a scientist, where a PhD degree is almost a necessity. She pursued plant breeding due to the lack of breeders in Kenya, and expressed gratitude to her former director and centre director at KARI for their support. Mbugua, who has been breeding for heat-tolerance and increased yield, has 100 clones in advanced trials looking at the chipping, crisping and high yield qualities of the potato clones.

Dr Lameck Nyaligwa, a senior crop research officer at the Selian Agricultural Research Institute (SARI) in Tanzania conducted his research on Genetic Analysis, Combining Ability and Yield Stability of Maize Genotypes Under Maize Streak Virus Prone Environments. He aims to breed cultivars for disease resistance, drought tolerance, Quality Protein Maize (QPM) and low-N qualities. Nyaligwa has prepared four papers for publication, and undertook his PhD to add capacity to his work. He mentioned his choice of the ACCI because of its efficient output of researchers when compared to other institutes offering plant breeding in Africa.

The only graduate of the eight who unfortunately was not able to attend the College of Agriculture, Engineering and Science Pietermaritzburg graduation ceremony in person, was Dr Jean-Baptiste Muhinyuza from Rwanda.  He completed his research on Breeding Potato (Solanum tuberosum L.) for High Yield and Resistance to Late Blight in Rwanda, and aims to work on new cultivars which are resistant to disease in Rwanda.

All the graduates made special mention of the ACCI’s programme and thanked their supervisors, Professor Mark Laing, Professor Hussein Shimelis, Professor Rob Melis, Professor John Derera and Dr Julia Sibiya for their invaluable support. Many emphasised that they hoped that the programme would continue to produce the capable and highly-skilled graduates it has been able to send into Africa in its more than ten years of existence. Each graduate also looked forward to spending more time with their families now that their PhDs are behind them, and were excited at the prospect of continuing their work in their home countries to contribute to the prosperity of the continent.