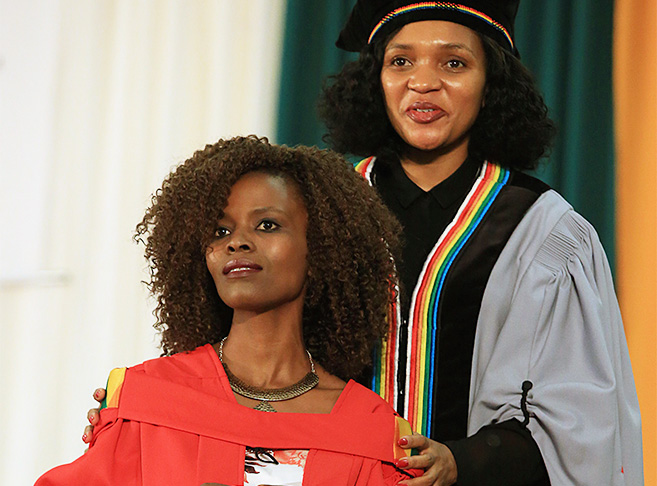 The use of traditional medicinal plants in the treatment of tuberculosis was investigated by Dr Balungile Madikizela who graduated with a PhD in Ethnobotany at this week’s ceremonies on the Pietermaritzburg campus.

Her research, supervised by Professor Johannes van Staden and Professor Jeff Finnie, arose in response to the rise of drug-resistant strains of tuberculosis and other infectious pathogens, which pose a serious threat to human health across the world, and more particularly in developing countries.

Madikizela, whose Masters degree focused on similar investigations into plants with the potential to treat diarrhea, chose to examine the potential of a variety of traditionally used medicinal plant species in South Africa to ascertain their antimicrobial properties, which could be of use in the treatment of respiratory ailments such as tuberculosis.

‘What interested me in this topic was basically the emergence of drug resistant tuberculosis bacterial strains, that created an urgent need for alternative treatment of the disease, with medicinal plants being recognised as having antimycobacterial agents,’ said Madikizela.

Not only did Madikizela’s work validate the traditional use of these medicinal plants, both in treatment of the symptoms and diseases affecting people, she also isolated two compounds that show promise for further pharmacological investigation. Madikizela was able to test the plants for both their antimycobacterial and anti-inflammatory effects.

Madikizela also pointed out, that while plants were assumed to be safe because they have been used for generations, this was not always the case in studies like hers, since some plants could be toxic to humans. Investigations into treatments using traditional plants have arisen in the search for alternatives to commonly-used drugs against which tuberculosis is becoming resistant.

Van Staden described Madikizela as hard-working and dedicated, saying that her work was excellent and resulted in the publication of a number of papers on the plant species she investigated.

Madikizela, who studied her undergraduate and Honours degree at the Walter Sisulu University before coming to UKZN, said she enjoyed the good relationships she had with her colleagues at UKZN as well as the excellent supervision she received from her mentors at the institution.

She hopes her research will make headway into identifying active anti-tuberculosis agents in sources such as medicinal plants, and she wants to continue with her research in a research centre in South Africa.

Expressing her gratitude to God for guidance and protection during her studies, Madikizela also thanked her supervisors as well as all the members of the Research Centre for Plant Growth and Development at UKZN and her family and friends for all the support she received.