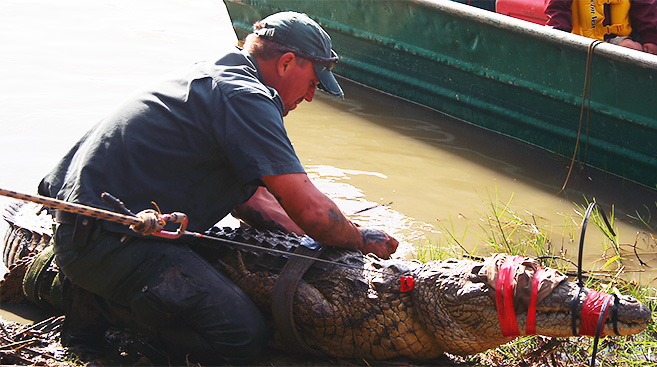 Dr Xander Combrink was awarded a PhD for research done on the Nile crocodile of Lake St Lucia.

Dr Xander Combrink has always had an avid interest in reptiles – especially crocodiles. This passion led to an MSc on the subject and now the crocodile stalker has successfully captured his PhD!

Combrink’s PhD focused on the spatial and reproductive ecology and population status of the Nile crocodile (Crocodylus niloticus) in the Lake St Lucia estuarine system.  He investigated the movements, activity budgets and home ranges of this species using GPS-satellite transmitters. Combrink also studied Nile crocodile nest abundance and distribution and the behaviour of nest guarding females, including maternal care and nest predation.

Combrink said that a major milestone in his research was when he confirmed for the first time the homing behaviour of a wild Nile crocodile.

Combrink is grateful for ‘the incredible privilege’ of being afforded the opportunity to work on a PhD. ‘This has allowed me to carry out three years’ full time fieldwork on the top aquatic predator of the Lake St Lucia estuarine system,’ he explained.

He described the estuarine lake system of St Lucia as one of Africa’s most remarkable but complex natural systems and in the words of a prominent estuarine scientist ‘...an outdoor laboratory probably unequalled anywhere else in the world’.

‘I’m extremely grateful for the opportunity given to me by my supervisor and co-supervisor, for the study time from Ezemvelo, and to Jon Warner, my research colleague in the field,’ he said.

Combrink plans to continue his work in the iSimangaliso Wetland Park as part of Ezemvelo Scientific Services.  ‘Hopefully I can remain involved with Nile Crocodile research and management for many years to come.’