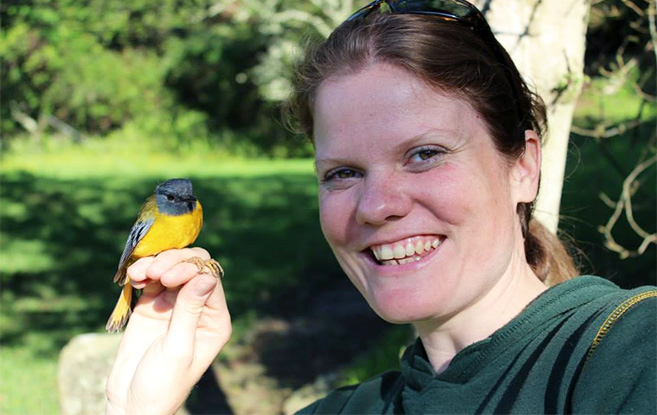 Birds on the Brain but Definitely no Bird Brain!

Doctoral graduate Dr Lindy Thompson grew up with a deep appreciation of the South African bushveld and all the wonders it offers thanks to her parents who instilled in her a deep appreciation for the beauty of nature, and the importance of protecting the natural environment and conserving indigenous plants and animals.

Thompson said because her parents were from northern England with its gloomy weather and relatively poor biodiversity, they made sure she and her sister were exposed to the natural beauty South Africa offered.

Thompson realised from a young age that she enjoyed working with and within the environment so when it came to deciding on tertiary education, UKZN’s School of Life Sciences provided her with exactly what she wanted - an excellent platform to specialise in the field of Wildlife Management and Conservation.

As part of her research for her MSc in Wildlife Management and Conservation, which she completed in 2005, Thompson studied the breeding biology of Eurasian Eagle-owls in southern Spain. Since then she has been involved in various projects on birds, from surveying wading birds on offshore islands in the Republic of Ireland, to working as a warden at reserves in Scotland and England for the Royal Society for the Protection of Birds.

More recently, she worked as a raptor handler and research manager at the African Bird of Prey Sanctuary outside Pietermaritzburg.

For her PhD in Ecological Sciences, Thompson was able to combine her love of birds with her interest in anthropocentric climate change and its effect on wildlife.  She said she was grateful to her boss at the African Bird of Prey Sanctuary, Ben Hoffman, for putting her in touch with UKZN’s Dr Mark Brown and Professor Colleen Downs who became her supervisors. Together they developed her PhD project looking at how birds would cope with climate change physiologically. They chose a small southern African bird, the ubiquitous Cape White-eye, as the study species.

Thompson’s research investigated if and how Cape White-eyes coped with climate change by adjusting their metabolic rates. ‘By the year 2080, South Africa is expected to have warmed by 4ºC, so I investigated the effect of such an increase on the physiology of Cape White-eyes,’ said Thompson.  ‘Although they altered their metabolic rates in response to the warmer temperature, the effect was only very slight, so it seems as though Cape White-eyes will be able to cope with this temperature increase.

‘Nevertheless, we should still be wary of the effects of heat waves and droughts on these birds,’ cautioned Thompson.

Thompson’s love and passion for the great outdoors was slightly curtailed by the hours of intensive lab work – often over weekends – involved in doing a PhD.  This didn’t deter her from going out bird ringing with friends and colleagues whenever possible, so that she could get into the field and enjoy the   sunshine.  ‘This helped to keep me sane,’ she said.

‘I didn’t realise at first how independent postgraduate students need to be but I had the help of some fantastic technicians and support from the postdoctoral students in my department, who guided me through my lab work and the analysis and writing stages. I am very grateful to them.’

Thompson’s supervisor, Professor Downs, also encouraged her to present posters and talks at scientific conferences in Tokyo, Arusha, Tshepise, the Drakensburg and at Skukuza.

‘This allowed me to network with local and international researchers,’ said Thompson.  ‘I was also given the opportunity to do some part-time lecturing in the School of Life Sciences, which was very rewarding, and enabled me to appreciate what a wonderfully diverse mix of students we have at UKZN.’

Thompson plans to continue with post-doctoral studies under the supervision of Downs and in collaboration with Mr André Botha of the Bird of Prey Programme of the Endangered Wildlife Trust. This research will focus on the ecology and movements of the Hooded Vulture in the Kruger-to-Canyons Biosphere Reserve.

Thomspon was grateful for funding received from the GreenMatter Trust and from UKZN for the study which she will conduct at various reserves in Limpopo.  ‘I am very excited to get out into the field again and to collect information on Hooded Vultures which will hopefully be incorporated into species management plans,’ she said.

Thompson’s long-term plans are to stay on in South Africa and continue working in the field of wildlife research.