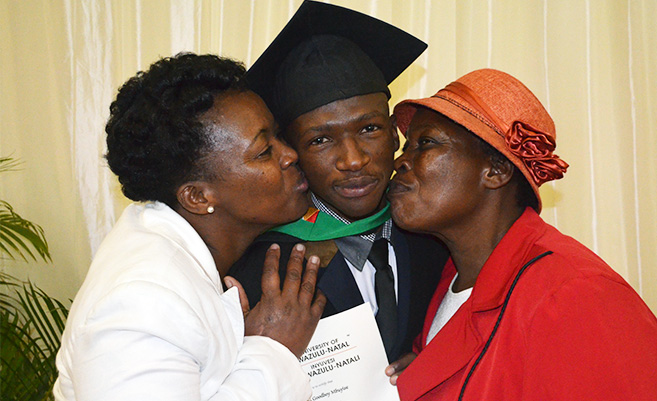 A proud moment for the family of Mr Xolani Mbuyise, who graduated with a Bachelor of Science degree majoring in Physics and Statistics.

A Long Walk to Graduation

Despite intense personal challenges, which included walking 20km to and from University every day, Mr Xolani Mbuyise of UKZN’s School of Chemistry and Physics, graduated with a BSc in Physics.

Mbuyise’s mother died when he was young and he was left in the care of his grandmother, who also looked after another three of her grandchildren on meagre earnings she received from providing laundry services. After receiving assistance from the Thandanani Children’s Foundation’s Family Strengthening Programme, Mbuyise was able to complete his schooling and matriculated in 2011 with an exemption.

The next step for Mbuyise was that of attaining a university degree so that he could support his grandmother and cousins.  He longed to study Physics, a discipline he enjoyed because he regarded it as the language of communication in science, saying it enables one to take ideas that can change the world and put them into action.

‘Physics is my love because it makes me think outside the box and see things that other people don’t ,’ explained Mbuyise.

His grandmother managed to raise the funds for Mbuyise’s registration at UKZN and he received financial support from the National Student Financial Aid Scheme (NSFAS).

Mbuyise didn’t have money for accommodation close to campus or even transport to class, meaning that he had to walk from his home in Slangspruit, a round trip of close to 20km. In his final year, Thandanani gave him a bursary that covered subsistence and travel costs.

Mbuyise says his favourite part of University life was the academic aspect. ‘I enjoyed being lectured by lecturers who pass their knowledge on to us as students, and also teach us about what we can expect in the real world.’

Mbuyise is currently completing his Honours degree in Physics and is considering the prospect of undertaking a Masters once he is finished. His Honours work is being supported by a bursary from the National Research Foundation, made possible by one of his lecturers, Dr Giuseppe Pellicane, who also facilitated support for Mbuyise during his undergraduate studies.

‘Xolani is an extremely committed student and we appreciate and value his presence here in physics,’ said Pellicane. ‘I look forward to enrolling him as a Masters student.’

Mbuyise’s Honours work, being supervised by Professor Genene Mola, is concerned with the investigation of electrochemical energy issues.

Mbuyise has inspired many with his story of triumph, and emphasises to others facing similar challenges that the obstacles one faces are not permanent.

‘In life, you must make sure that you use the opportunities you are given, remembering that what some people see as a problem, others see as an opportunity,’ said Mbuyise. ‘What has worked for me is the application of Luke 1:37, which says that nothing is impossible with God.’

Mbuyise expressed gratitude to God and thanked his grandmother for raising him.