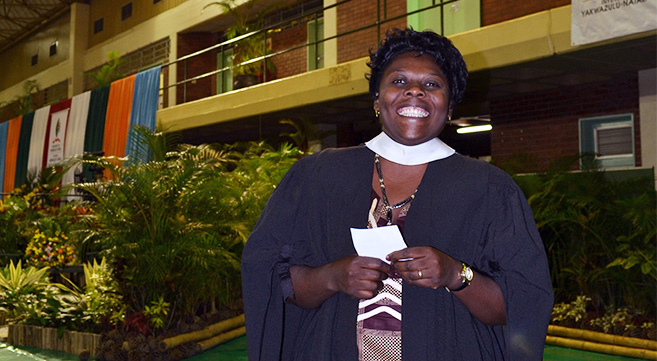 Ms Edith Kibiribiri is delighted at receiving her Masters.

Challenges women, including refugees, face when accessing antenatal care in Government clinics in KwaZulu-Natal was the subject of a UKZN masters study.

The study titled: “Challenges Facing Refugee Women Accessing Antenatal Care in KwaZulu-Natal, South Africa,” was conducted by Ms Edith Kibiribiri of the School of Clinical Medicine in the Department of Obstetrics and Gynaecology under the supervision of Professor Daya Moodley of the Women’s Health and HIV Research Unit.

It was conducted using questionnaires, maternity chart audits and in-depth interviews with refugees and South African women who had given birth in the past six months and were receiving antenatal care in Durban.

The study found that among women sequentially enrolled, 39% (78/200) were refugees and 61% (122/200) South Africans.  The majority (73%) of refugees did not understand the local language (isiZulu) and basic antenatal care generally was less than adequate for all women irrespective of their nationality.

‘In contrast to South African women, refugees were not advised about maintaining their general health, the purpose of laboratory investigations and indications for treatment with accompanying dosing instructions,’ said Kibiribiri.

She said the study showed that refugees were uninformed about the expected labour process or identifying labour but were not advised on infant feeding options and contraception.

The study concluded that there were disparities in antenatal care when procedures involved verbal communication between pregnant refugees and Health Care Workers.

Kibiribiri is currently a Study Coordinator at UKZN and plans to extend her research into pregnancy outcomes among refugees compared to local women.

Born in the Democratic Republic of Congo (DRC), Kibiribiri fled to South Africa in 1997 when war broke out in her country.  ‘I had no idea how to communicate in English or any other local languages. I spent all the time I could in the library teaching myself English because I could not afford to enrol at a language school.’

Kibiribiri, who had completed a nursing degree in the DRC, went on to earn an honours degree through UNISA. Kibiribiri’s husband, Dr Teke Apalata who is also from the DRC is graduating from UKZN with a PhD (Medicine).

‘While I was working as a facility supervisor at the Women’s Health and HIV Research Unit, I noticed that refugees were having problems communicating with health care workers. I was motivated to address the issue since I had encountered similar problems when I arrived in this country.’

Kibiribiri has recommended that trained interpreters be appointed in the Health Care field in South Africa to assist with history taking, education and provision of information to patients with local languages.

She also recommended that pamphlets on health care services be written in a variety of African languages.