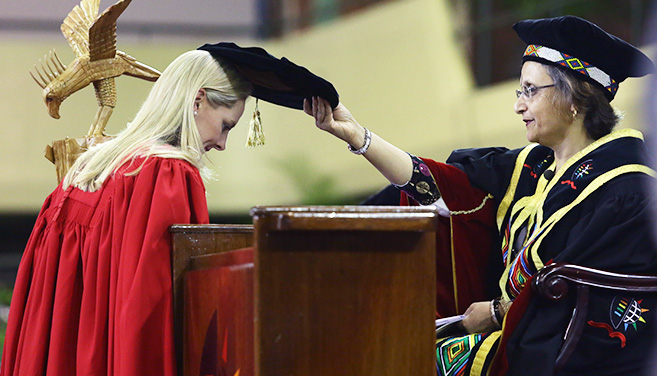 Tenofovir safe for Women Infected with Hepatitis B Virus

Tenofovir, an antiretroviral drug used daily by millions for AIDS treatment and also to prevent new HIV infections, is safe for use by women infected with hepatitis B virus, according to a UKZN PhD study conducted by graduate Dr Cheryl Baxter.

‘One of the potential drawbacks of using antiretroviral drugs like tenofovir in patients infected with hepatitis is that when the treatment is interrupted it can potentially cause rebound hepatic flares, which can be severe,’ warned Baxter.

However, the study - conducted among 889 women using intermittent tenofovir 1% gel for HIV prevention - found no association with hepatic flares, no effect on hepatitis B viral (HBV) load and no enhancement of the development of tenofovir resistance genetic mutations.

Based on the study findings, women with HBV infection can safely use tenofovir 1% gel for HIV prevention without adverse impact on their HBV infection.

According to Baxter, in sub-Saharan Africa, young women between the ages of 15 and 24 years are particularly vulnerable to HIV, accounting for 76% of the total number of cases worldwide in that age group.

‘Despite the greater vulnerability of women, current HIV-prevention strategies provide little protection for them, especially young women. Due to gender power imbalances, they are often unable to successfully negotiate condom use with their male partners, insist on mutual monogamy, or convince their partners to have an HIV test.

‘Biomedical technologies, such as microbicides, that women can use to protect themselves from acquiring HIV are urgently required.  However, it is important to ensure that the development of new products for HIV prevention do not adversely impact on other diseases.’

The study was conducted at two clinics at UKZN’s Centre for the AIDS Programme of Research in South Africa (CAPRISA) in KwaZulu-Natal; one in the Durban city centre and the other in the rural Vulindlela sub-district under the supervision of Professor Salim Abdool Karim.

Baxter is currently involved in research on HIV prevention for women. She plans to continue to contribute towards studies that could potentially empower women to protect themselves from acquiring HIV.

She said her husband was very proud of her achievement. ’My daughters, however, are not quite sure what to make of my new “title”. They think a person called “Doctor” is someone you go to when you are sick.’