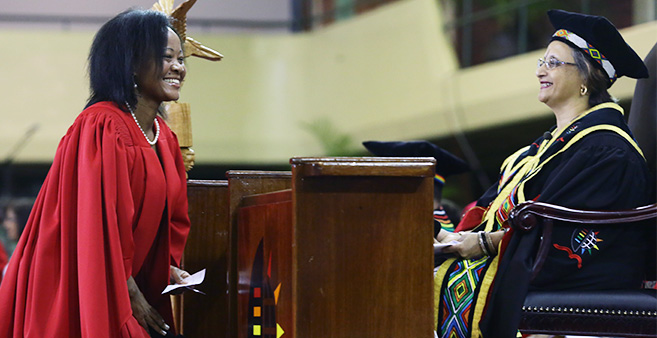 Study on Metabolic Complications of Antiretroviral Therapy in Blacks

“Metabolic Complications of Antiretroviral Therapy in a South African Black Population”, was the title of the Medical Doctorate thesis of the Acting HOD in UKZN’s Department of Medicine, Dr Nombulelo Magula.

She investigated the prevalence of metabolic complications (dysglycaemia and dyslipidaemia) and body fat distribution patterns associated with HIV infection and compared this with HIV negative controls. Those starting antiretroviral therapy were then followed up for two years to study the incidence of dysglycaemia, dyslipidaemia and the pattern of fat distribution associated with ART.

According to Magula, there is very limited data in Africa particularly using the tools that were employed in her study - the Computerised Tomography (CT) scan and the Dual Energy Absorptiometry (DXA) scan to measure fat distribution.

‘There is paucity of longitudinal data on dysglycaemia, dyslipidaemia and body fat distribution in Africa,’ said Magula.

The study combined a cross-sectional and a prospective design. ‘While there was no diabetes at baseline in the HIV-infected participants using the oral glucose tolerance test, there were incident cases during follow up on ART. Following two years of ART, there was a significant increase in body mass index (BMI) as indicated by overweight/obesity, trunk and total body fat measured by DXA scan,visceral and subcutaneous fat by CT scan. The significance of this is that these are all risk factors for cardiovascular diseases,’ she explained.

Her study focused on South African, second generation Zulu people. She said her findings informed her about the long-term impacts of treating HIV infection. ‘While a very safe ART regimen is being provided within the government sector, the study highlights the importance of setting up interventions to reduce emergence of non-communicable diseases in our population as people live longer on ART.

‘I cried so much when I received notification of the PhD award,’ she said. ‘Seeing tears in my father’s eyes made me realise the pain my parents must have experienced in carrying me through every hurdle, obstruction and challenge that I had to go through to get here. My mom reminded us that it’s all over now,’ she added.

Magula said she was happy with her studies and was eternally grateful for the support she received from her supervisors, Professor Ayesha Motala and Professor Umesh Lalloo.

Magula is currently working on publishing her work while she supervises several Masters students. ‘My goal is to contribute to making the process of attaining academic achievement less painful. I have been appointed Head of Medicine and will officially take up this position shortly. I hope to serve as a role-model to young people and espouse the value of life-long learning’.

According to Magula the examiners judged her work as being novel and contributing to knowledge in the field.

Running keeps Magula going. ‘I owe each of my daughters Abi, Siphe and Palesa their maternity leave because I worked right through it. My husband who is Head of ENT at Walter Sisulu University is my pillar of strength and spurred me on when I felt I couldn’t continue. My parents prayed through all the hardships.’

Her eldest daughter wrote the most touching message on Facebook that ended with: “I cannot think of anyone more deserving of this PhD. You’re my greatest inspiration. Through all the stress and chaos you’ve never failed to be there for me. WELL DONE Girlfriend, You’re killing it!!’

She said her husband was over the moon and her phone has not stopped ringing with friends and family congratulating her on her achievement.

The KwaMashu born clinician said: ‘Performing all the biostatistical analysis of my clinical data was quite rewarding and I thank Mrs Nonhlanhla Yende from CAPRISA for her help when I experienced SAS programming difficulties. I have a long list of people who I have thanked in my thesis preface but unfortunately cannot mention them all here.’