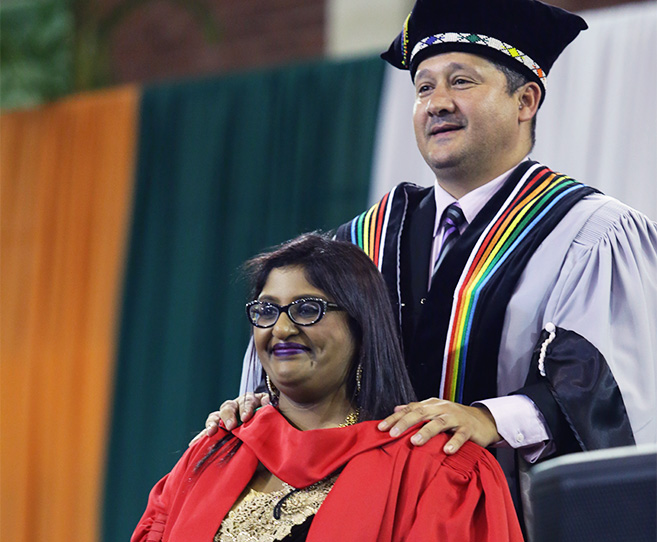 UKZNs Dr Vineshree Govender graduated with a PhD in Medicine.

UKZN’s Dr Vineshree Govender graduated with a PhD in Medicine based on her study on the impact of HIV and obesity in the development of preeclampsia.

Supervised by Professor Anita Naicker and Professor Jack Moodley, Govender’s study titled: “The Role of Adiponectin, Leptin, TNF and Resist in HIV- Associated Pre-eclampsia,” examine the levels of adiponectin/leptin/TNF-a and resistin amongst non-pregnant, normotensive and pre-eclamptic pregnant cohorts in respect of their BMI and HIV status.

‘My study addressed the levels of these hormones in Black South African women to enable me to target specific treatments for our population in the future,’ said Govender.

His  study was performed in collaboration with the Serum Staten Institute in Denmark. ‘We carried out the analysis of serum using bioplex assays - this was done in Denmark,’ she said.

According to Govender, this study is able to depict baseline adiponectin / leptin / resistin and TNF-a levels according to BMI in the local population.

She said following institutional ethical approval and informed consent, serum was obtained from a total of 328 women attending the RK Khan Hospital, a regional and district hospital in eThekwini, KwaZulu-Natal.

Women were recruited into two groups, 120 non-pregnant and 208 pregnant group.

Pregnant women were further, categorised into the normotensive 118 pregnant and the 90 pre-eclamptic groups.  The pregnant cohort was also sub-stratified in accordance with their HIV status.

Serum was assessed by a double antibody sandwich ELISA technique using the DuoSet ELISA Development System for human adiponectin and TNF-a. Additionally, serum leptin and resistin was detected by the Bioplex immunoassay (Biorad).

Absorbance was read spectrophotometrically at 450 nm (Systems).  SPSS version 21 was used to analyse the demographic and experimental data.

‘Irrespective of the HIV status, body mass index and maternal weight were not statistically significantly different between the normotensive and pre-eclamptic groups respectively.  Likewise, the distribution of BMI was the same across the study groups with respect to HIV status,’ she said.

The levels of TNF-a, leptin and resistin were significantly different within the normotensive pregnant versus pre-eclamptic groups.

She said the study demonstrated statistically significant differences in adiponectin/ leptin/ TNF-a and resistin between non-pregnant, normotensive and pre-eclamptic cohorts with respect to HIV status and BMI.

‘There were significant differences in the levels of adiponectin/leptin/resistin and TNF-a with respect to HIV status.

‘Additionally, a statistically significant difference in the level of adiponectin in the non-pregnant as compared to the normotensive cohorts was noted. Furthermore, there were statistically significant differences in the levels of TNF-a, leptin and resistin in the normotensive as compared to pre-eclamptic cohorts,’ said Govender.

‘My study established an adipokine baseline for future reference with regards to South African pregnant and non-pregnant black women.  Albeit at term, the study shows a statistically significant difference in the levels of adiponectin/leptin/resistin and TNF-a in HIV positive patients within the non-pregnant versus pregnant population. Within the pre-eclamptic cohort there was no statistically significant difference in EOPE versus LOPE.’

Govender is currently planning to publish articles on the study and is interested in new research on high risk obstetrics.

She said her family was very proud of her achievement.