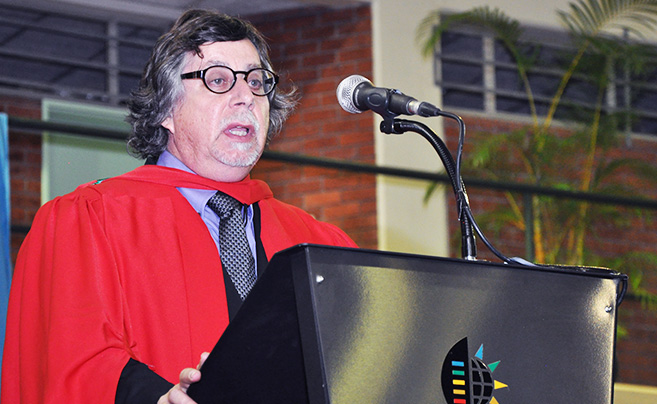 A distinguished scholar in immunology and cell biology, Professor Alan Aderem, received an honorary Science doctorate from UKZN in recognition of his contribution to improving the role of science in providing evidence-based solutions to medical problems in South Africa.

The problems highlighted are particularly in the area of immunology as applied to the fight against HIV/AIDS and his commitment to translating his expertise and experience into giving back to South African society.

Aderem is the President of the Seattle Biomedical Research Institute in the United States where he has made an immense contribution to medical research. His laboratory’s research focuses on diseases including AIDS, malaria, tuberculosis and influenza affecting people in resource-poor countries.

His involvement in the establishment of the KwaZulu-Natal Research Institute for Tuberculosis and HIV (K-RITH) at the Nelson Mandela School of Medicine in Durban contributed significantly to a successful partnership between UKZN and the Howard Hughes Medical Institute in the United States. Aderem chairs the board of K-RITH.

Born in South Africa, he spent his teenage years involved in the anti-apartheid struggle playing an active role in trade unions and community movements resulting in him becoming a young activist during the 1976 Soweto uprisings.

He was banned by the apartheid regime and placed under house arrest for five years from 1977 to 1982.

Aderem is a biologist, specialising in immunology and cell biology. His particular focus is the innate immune system (the part of the immune system that responds generically to pathogens) and how it recognises and formulates responses to infectious agents as well as how it instructs the adaptive immune system to provide long-lived immunity to the pathogen.

In essence, how the immune cell reads the molecular barcode of the infectious agent and precisely defines the nature of the threat.

Aderem is also applying the tools of systems biology to the study of diseases that significantly impact global health with an emphasis on the role of the innate immune system in vaccine responses.

He has had a strong influence on shaping the biomedical research environment in South Africa, especially in fore-fronting the importance of basic science as a foundation for improving health care.

Aderem has received numerous awards and serves on several prestigious boards and panels, including the Advisory Panel of the European Research Council Panel, the External Advisory Council on Tuberculosis which is part of the Bill & Melinda Gates Foundation, and the International AIDS Vaccine Initiative’s Scientific Advisory Board.

Addressing graduates at the UKZN College of Health Sciences Graduation ceremony after receiving his doctorate, Aderem said: ‘Science is a political act that is intrinsic in society and lends itself to the improvement of society. It’s so easy to waste our lives and to get bogged down in the detail of life. Formulate what you want to achieve and don’t let anyone define you and what you believe in your heart. Nothing is impossible. It’s a matter of the degree of difficulty. Don’t be afraid of failure. Your biggest risk is getting too comfortable.’