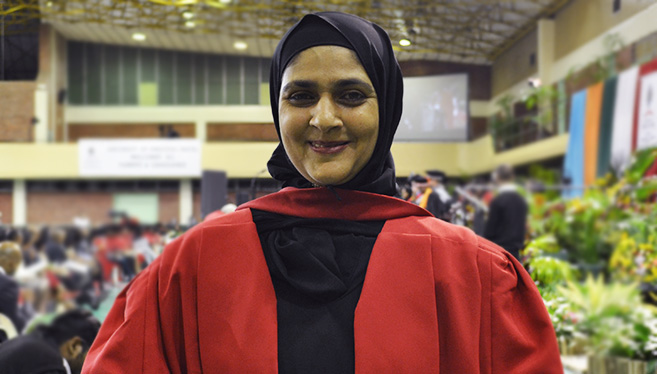 Lecturer and Head of the Clinical Unit in the Department of General Medicine, Dr Farhanah Paruk, graduated with a PhD after conducting a study on hip fracture and osteoporosis.

According to Paruk, osteoporosis and osteoporotic fractures are thought to be rare in South Africa.

She believes her study, titled: “A Comparison of the Demographic Profile, Risk Factors, Outcomes and Health Care Costs in Geriatric Patients with and without Osteoporotic Hip Fractures in the Public Health Sector in the eThekwini Area,” is the first in South Africa on osteoporotic hip fractures to be conducted among a multi-ethnic society. ‘The last study was conducted among Africans in Gauteng in 1968,’ said Paruk.

The epidemiology, risk factors and outcomes of osteoporotic hip fractures are well established in the developed world, but there are very few studies from Africa. The highest rates are usually seen in whites, followed by Indians and African-Americans in the United States.

In this study, conducted at public sector hospitals in the eThekwini area, the highest number of fractures were evident in the Indian population followed by Africans. This is most likely a result of the preferential usage of the private sector by White patients.

The study found hip fracture incidence increased significantly with age and was more common in women than men; however men fractured at a younger age compared to women.

Although a number of patients had prior fractures, they had not been screened or treated for osteoporosis which could significantly decrease the risk of a second fracture.

This first study from Africa documents a mortality rate at one year of 36.4%. Furthermore, in survivors at one year there was a significant decline in all activities of daily living, increased pain and decreased life quality scores.

The study found that if subjects had been screened and treated appropriately there would have been considerable health care savings.

The findings support the need for urgent implementation of national guidelines to screen for high risk patients and to refer these patients for further investigations and treatment.

Paruk, who was supervised by Professor Bilkish Cassim, is currently working on establishing an osteoporosis clinic at King Edward VIII Hospital. She plans to help develop a fracture liaison service for the province as it decreases the risk of a second fracture.

Paruk has two children and enjoys teaching and practising Medicine.

She said her family was very happy about her achievement, ‘They are extremely proud and have been a pillar of support, especially my husband.’