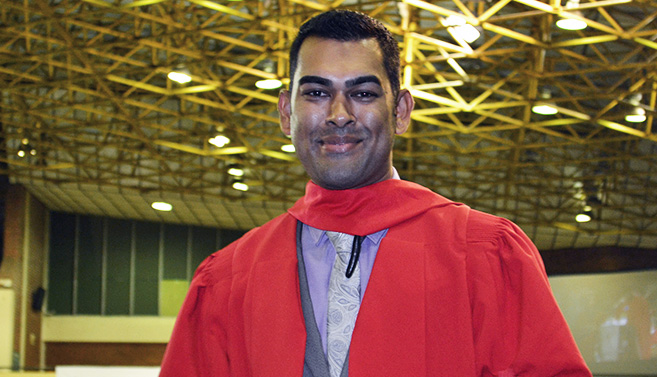 Dr Saiyur Ramsugit graduated with a PhD in Medical Microbiology.

Dr Saiyur Ramsugit has graduated with a PhD in Medical Microbiology from UKZN’s College of Health Sciences with a thesis titled: “The Role of Mycobacterium Tuberculosis Pili (MTP) as an Adhesin.”

The work describes the identification of a novel adherence factor (adhesin) of the tuberculosis-causing bacterium, M. tuberculosis.

According to Ramsugit, more than a third of the world’s population is infected with TB, a disease responsible for 1.5 million deaths in 2013. He believes that reducing the global burden of TB requires the development of more effective treatment, diagnostic, and preventative strategies. This in-turn is dependent on a greater understanding of the mechanisms by which the pathogen is able to cause disease.

‘Pili are hair-like structures present on the surface of several bacterial species,’ said Ramsugit. ‘In 2005, researchers at the University of Arizona showed that M. tuberculosis produces pili. However, their role in this organism was not previously reported. In this PhD study, the gene that is responsible for pili formation was knocked out to create a mutant TB strain that lacked pili.

‘The mutation was complemented, thereby creating a TB strain that produced excessive amounts of pili. The phenotype of the pili-proficient and pili-deficient strains was then compared. The results showed that the strains that expressed pili were better able to form a biofilm (ie a community of bacteria). Living as a community allows bacteria to become recalcitrant to antibiotics and, therefore, influence the way we treat these infections.’

The study also found that the strains expressing pili were better able to infect human cells than the strain lacking pili, without eliciting the host cytokine response. ‘Pili, therefore, function in these important aspects of TB pathogenesis. These results lead us to believe that developing drugs and vaccines targeting M. tuberculosis pili may hinder the ability of this organism to infect and persist in humans,’ said Ramsugit.

Ramsugit has published four research papers in scientific peer-reviewed journals during his PhD and a further two manuscripts are currently under review. His first paper, originally published in the Antonie van Leeuwenhoek Journal of Microbiology, was only the second UKZN study to be featured in World Biomedical Frontiers (http://biomedfrontiers.org/infection-2014-4-15/) because of its ‘innovation and potential for significant impact’. World Biomedical Frontiers is an online publication that focuses on ‘cutting-edge biomedical research from around the globe’.

Ramsugit (25) is one of the youngest students to graduate with a PhD from his unit.

He received Dean’s commendations and 22 certificates of merit/pass with distinctions during his undergraduate and honours degrees. He is a member of the International Golden Key Honours Society and was awarded the MERCK Young Scientist Award for being the top final year Biochemistry student at UKZN’s Westville campus in 2010.

Ramsugit won the 3rd and 2nd best student oral presentations at the UKZN College of Health Sciences Research Symposia in 2013 and 2014, respectively. Recently, he was invited for inclusion in ‘Marquis Who’s Who in the World’, a biographical book profiling leaders in society, who are influencing their nation’s development.

Based at the Medical Microbiology and Infection Control Academic Unit in the School of Laboratory Medicine and Medical Sciences, Ramsugit is currently undertaking a post-doctoral research fellowship. In the current research, Ramsugit aims to compare in vitro pellicle biofilm formation by clinical M. tuberculosis isolates and to identify novel genes and pathways essential to their formation.

Ramsugit of Park Rynie on the Kwazulu Natal South Coast has two elder sisters, both of whom graduated from UKZN with BCom Accounting degrees.

He attributes his success to the support of his family and the innovation, encouragement, mentorship, and guidance provided his supervisor, Dr Manormoney Pillay.