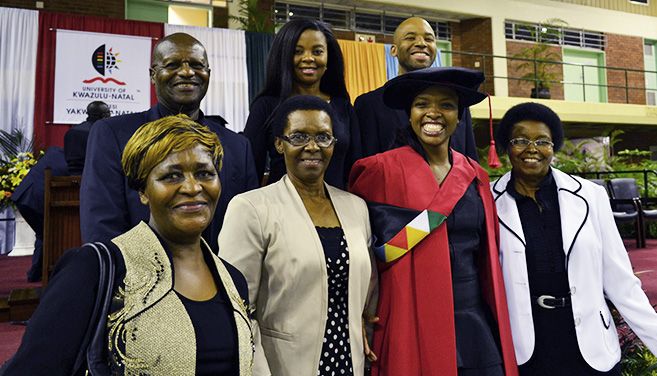 Dr Mopo Radebe seen with her family at the UKZN Graduation ceremony.

‘It is the completion of something great and the beginning of even greater things,’ said Dr Mopo Radebe, who graduated with a PhD supervised by the Scientific Director of UKZN’s HIV Pathogenesis Programme, Professor Thumbi Ndung’u.

Radebe, the recipient of the Technology Innovation Agency Scholarship from 2011 to 2013, won the prestigious L’Oréal-UNESCO Regional PhD Fellowship for Women in Science in sub-Saharan Africa in 2012 and investigated the development of cytotoxic T cells following acute HIV-1 infection.

‘These cells are thought to play an import role in HIV immune control and many vaccines are being designed to induce them,’ said Ndung’u in his congratulatory remarks.  ‘However, it is not clear which particular cytotoxic T cell should be induced to achieve protection by a vaccine.’

Radebe identified the earliest cytotoxic T cell responses generated following HIV infection, finding that responses directed at the HIV Gag protein were associated with viral control but unfortunately these responses developed slowly and some did not persist and therefore their impact on the virus was blunted and eventually ineffective.

‘On the other hand, responses directed at the Nef protein generally did not seem to contribute to viral control. Furthermore, she found that most immune responses generated during acute HIV infection did not cause harmful mutations in HIV suggesting that they may be defective in some ways,’ said  Ndung’u.

Radebe’s study provides a rational basis for the design of HIV vaccines and will facilitate additional studies on how to make cytotoxic T cells more effective against HIV.

Radebe said: ‘In South Africa HIV affects each and every one of us, either directly and indirectly - one is either infected or is connected to someone who is. I try to imagine an HIV-free South Africa, where we will not live in fear of contracting this disease or passing it on to our partners or our offspring. Where no child will be orphaned by HIV and all parents live to see their children grow and reach their full potential.’

She said this vision would be realised when ‘a vaccine that will put an end to HIV is discovered’.

The Johannesburg-born Radebe said: ‘UKZN houses some of the world’s leading researchers in HIV and I wanted to learn from the best. Working with Professor Thumbi Ndung’u has been a privilege; he is an exceptional mentor and his love for science is enthusing.’

Driven by the motto: ‘It can be done. It will be done’, Radebe is now a developmental lecturer in the School of Laboratory Medicine and Medical Sciences. She said the battle against HIV continues.  ‘I also hope to inspire other young people to pursue a career in science to help solve this problem that is on our doorstep.’

She thanked her husband, family and colleagues at UKZN for their unyielding support.  ‘I have a 2-year-old son, Warona Oratile. He is awesome and undoubtedly a science that remains elusive to me,’ she said.