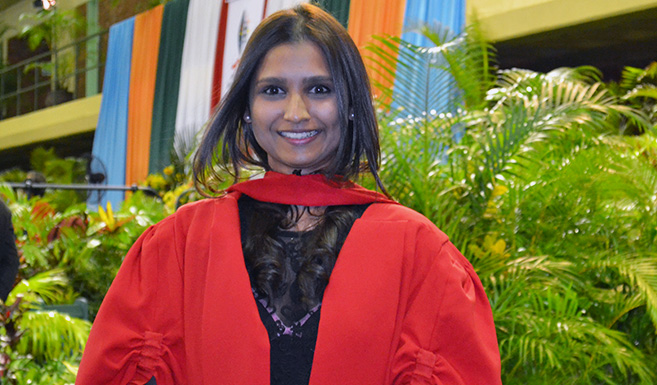 Dr Tanya Maistry graduated with a PhD in Cardiology.

Research undertaken by a UKZN PhD graduate shows that Indian people living in Durban’s Phoenix area have a high risk of suffering from metabolic syndrome (MS).

The study, conducted by Dr Tanya Maistry who graduated with a PhD in Medicine from UKZN’s College of Health Sciences, was titled: Genetic Contribution to the Risk for Metabolic Syndrome: An Investigation of Candidate Gene Polymorphisms related to Lipid and Carbohydrate Metabolism.

The term ‘metabolic’ refers to the biochemical processes involved in the body's normal functioning. Risk factors are traits, conditions, or habits that increase ‘the chance of developing a disease’.

According to Maistry, her study’s findings are relatively new, ‘Some of the polymorphisms selected for this study have not been previously reported in South African Indians.’

She said the MS risk could lie in its components rather than in MS as an entity. ‘Data obtained in this study may allow for the implementation and development of medical interventions that could counteract susceptibility to the MS, thereby reducing the risk for cardiovascular disease.’

Maistry said the main objective of the study was to determine genetic patterns that may be associated with the MS.

The study also aimed to:

•   Identify genetic patterns of participants with the MS focusing on genes related to insulin resistance such as Lipoprotein Lipase, Human Paraoxonase I and Cholesteryl Ester Transfer Protein

‘In epidemiology, our results demonstrate that South African Indians from the Phoenix community present with an increased risk for the MS. Age, gender and clustering of the metabolic components influenced the results.’ IR was also observed to be the driving factor for MS pathogenesis with age, gender, clustering patterns and physical activity serving as key contributing factors.

‘In genetics, our results demonstrate the adiponectin 45T>G and the human paraoxonase 1 192Arg/Gln polymorphisms to be genetic markers that may assist in identifying participants who are susceptible to hypocholesterolemia (in males with the MS and with IR) and hypertension (in males with the MS), respectively. The lipoprotein lipase HinfI and human paraoxonase 1 192Arg/Gln polymorphisms associated with IR may also serve as genetic markers that may assist in identifying males with MS who are susceptible to hypertension. Gene-environmental associations exerted a degree of protection against the risk for the MS and IR.’

Maistry said. ‘This PhD experience was time consuming and many sacrifices were made in order to achieve my goals.’

She is currently an ethics committee member at BREC and is interested in getting into a good postdoctoral programme, ‘There are few offers at present but am keeping my options open.’

Maistry is the youngest of four children in her family. She said her late father taught her that education was a key factor for liberation and independence. ‘My success is therefore dedicated to my dad as well as my mother who has been my rock and pillar of strength during my academic career. She has put up with my grumpiness (due to lack of sleep) and has motivated and pushed me to succeed. My eldest sister has also been my inspiration and support. She has guided me and moulded me into an independent, humble and career-driven individual while my brother been a fatherly figure in my life. I love these guys to bits,’ said Maistry.

‘I thrive under pressure and this I believe keeps me going - it is when my best work surfaces.’

She said her family was thrilled about the completion of her PhD, ‘My mum now addresses me as Dr T and finds any excuse to brag about her daughter. The family is also planning a trip abroad to reward me for my hard work, long nights and sacrifices during the PhD programme.