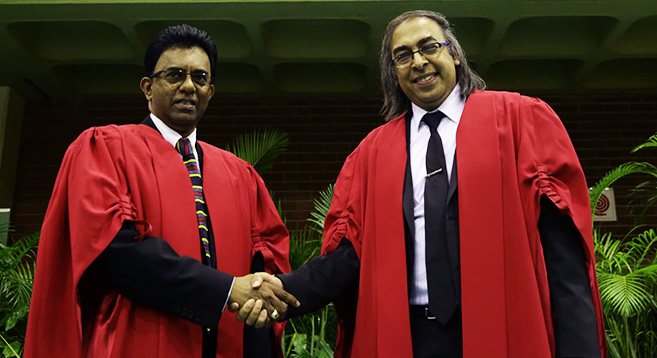 Research by UKZN Fetal specialist Dr Ismail Bhorat is believed to be the first to show a link between cardiac dysfunction and adverse perinatal outcome in gestational diabetics which thus becomes the first predictive parameter in the world to prevent adverse outcome and fetal death in diabetics.

According to Bhorat, who graduated with a PhD in Medicine, his study titled: Fetal Cardiac Haemodynamics in Normal and Complicated Pregnancies, has generated national and international interest with many universities worldwide wanting to collaborate with him to further the research.

‘This research was the first to show deteriorating cardiac function in worsening fetal growth restriction and has been shown to be a precursor of a “warning” parameter before severe impairment or death occurs so timely intervention can occur in this condition,’ he said.

The study was also the first to show that in pre-eclampsia (hypertension in pregnancy) fetal cardiac functional assessment can be incorporated as an integrated model to improve fetal surveillance and guide the clinicians to timely delivery before adverse outcomes occur.

Bhorat said his thesis dealt with fetal cardiac functional assessment and its use in predicting adverse outcomes in complicated pregnancies so treatment and intervention can be instituted before fetal impairment (which is referred to as morbidity) or fetal death (mortality) occurs.

The thesis was set out in four parts. The first part of the investigation in cardiac haemodynamics was to establish normal pregnancy ranges of cardiac function parameters.

‘This is the first study to establish normal ranges of these parameters, that is the myocardial performance index and E/A ratio,  in Africa and  one of few studies establishing normal ranges worldwide,’ said Bhorat.

The second part of Bhorat’s study involved gestational diabetes. He said in gestational diabetics due to its unique pathophysiology involving metabolic problems, standard routine antenatal fetal surveillance techniques were inappropriate and insufficient as a monitoring tool.

‘Thus at present there are no predictive models for fetal compromise in diabetics.  Research was undertaken and completed and was the first study in the world to show that a clear relationship existed between abnormal cardiac function as reflected in the elevated myocardial performance index (MPI)  and adverse fetal and neonatal outcome in gestational diabetics.’

He said since his research began, he had incorporated the myocardial performance in routine antenatal fetal surveillance in all diabetics seen at Inkosi Albert Luthuli Central Hospital and has markedly improved his predictive performance for adverse fetal outcomes.

Bhorat’s third project involved intrauterine growth restriction. ‘Research in fetal cardiac function was embarked on in growth restriction to be able to tract cardiovascular deterioration and develop the technique as a “warning” parameter before severe compromise and neurological damage sets in.’

Bhorat believes the results of this project can be incorporated and integrated into routine antenatal surveillance techniques and serve as a guide to clinicians in the timeous delivery of the growth restricted fetus.

The fourth project he undertook in the Fetal Unit was to establish cardiac function in severe pre-eclampsia.

According to Bhorat, cardiac dysfunction has not previously been conclusively demonstrated in pre-eclampsia. His fourth project demonstrated that cardiac dysfunction occurred in pre-eclampsia and would allow clinicians to track myocardial function based on the MPI cut-offs for adverse outcome and improve his predictive capabilities that could lead to timeous delivery and reduce perinatal morbidity and mortality.

‘These projects have made the Fetal Unit at IALCH one of the important Fetal Units in the world establishing and implementing cardiac haemodynamics as an antenatal surveillance technique,’ said Bhorat.

A lot of this work was already being incorporated into clinical practice and has improved outcomes and prevented morbidity and mortality. ‘Internationally and nationally this work has generated a lot of interest and we have been inundated with requests to teach the technique so that it could also be integrated into other fetal monitoring systems.’

Bhorat conducted his research under the supervision of Professor Jayanthilall Bagratee. Three of his papers have already been published in the prestigious international journal Prenatal Diagnosis and the fourth paper has been sent for publication.

He is further developing his technique, ‘I am currently involved in collaborative trials with both national and international universities to include other high risk clinical conditions as well.’

Bhorat, a fetal specialist who is passionate about what he does, says his chill time revolves around spending quality time with his family, swimming, reading and watching sport, especially soccer and cricket.

He has five children, three are studying medicine at UKZN and two in high school and ‘also medical school bound’.

“My wife is a pharmacist. We are a very close-knit family and the support and strength is the foundation for my success and achievements,’ he said.

Bhorat, originally from Stanger on the Kwazulu-Natal North Coast, did his MBChB and postgraduate training in Obstetrics and Gynaecology at the Nelson R Mandela School of Medicine in Durban