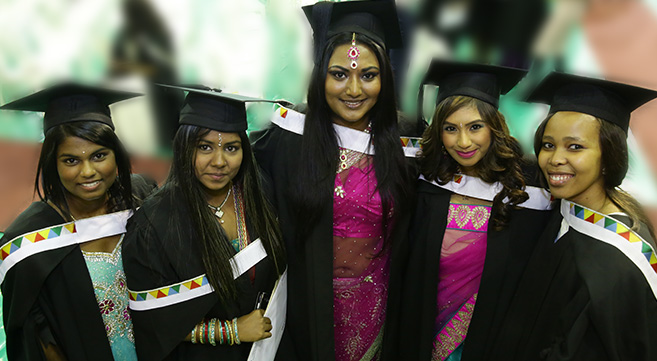 Her study investigated the impact of microbial translocation on innate immunity and TB recurrence. She said she is currently doing her Masters in Medical Microbiology at UKZN’s Department of Infection Prevention and Control (IPC).

Completing her Honours, Masters and PhD degrees has been on the list of long-terms goals for Moti – a determined young scholar from Reservoir Hills who conducted a study titled: The Molecular Confirmation of the hbhA Gene Knockout of Mycobacterium Tuberculosis V9124.

Moti said: ‘The amount of joy and happiness one feels when hard work pays off is inexplicable. Along with pride and motivation, this achievement brings with it not only recognition in the academic field but realisation that anything is possible with hard work, perseverance and determination.’

Moti is currently pursuing a masters degree focused on tuberculosis research at a molecular level at the Medical Microbiology’s Department of IPC.

Ntoyanto of Queenstown in the Eastern Cape says she could not have done it without the assistance and guidance of her mentor, Professor Photini Kiepiela, and supervisor, Dr Justen Manasa.

Her study determined the prevalence of HIV-1 transmitted drug resistance in sampled populations of Umkomaas and Bothas Hill. She is now registered for a Masters in Virology degree at the University of Witwatersrand.

‘It is an honour and privilege to be awarded this prestigious pass at postgraduate level. I feel satisfied and proud that my hard work and dedication throughout my honours year produced such outstanding results,’ said Rampersad of Chatsworth whose study was titled: “Effect of Tazobactum on Enterbacteriaceae with Increased MICs to Carbapenems.”

Vallen conducted a study titled: Immunolocalization of HIV Viral Antigens and its Receptors at the Maternal Fetal Interface in Normotensive and Pre-eclamptic Pregnancies.

Associate Professor and Head of Medical Microbiology at UKZN and the National Health Laboratory Services (NHLS), Professor Koleka Mlisana, said:  ‘We congratulate all the students for the hard work and excellent results. Remember all the time, excellence opens doors!’