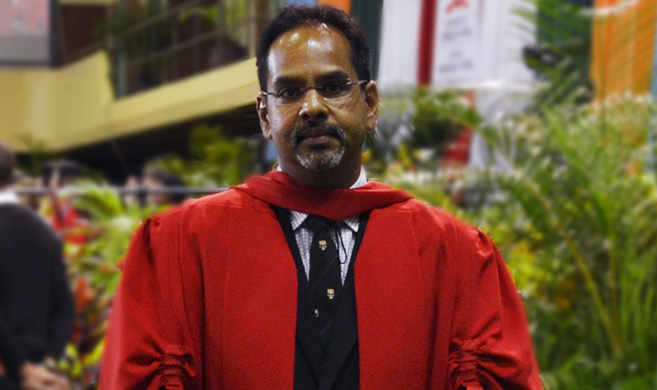 The study examined faecal Incontinence (FI) in the postpartum population.

According to Naidoo, information regarding this condition in South Africa is sparse. ‘Determining the true incidence of it is often difficult. Our study determined the symptomatic incidence, and looked at racial differences and the influence of the various etiological factors for FI in our post-partum population.’

The study concluded that FI impacts negatively on the quality of life of affected individuals. ‘Women with symptoms of FI should be offered assessment, treatment, and follow up evaluations. The reluctance of patients and health personnel to acknowledge or discuss it, compounds the difficulties in managing this condition,’ he said.

The study was conducted in KwaZulu-Natal under the supervision of Professor Jack Moodley. Naidoo believes it was the first of its kind in South Africa. ‘In fact we are not aware of any such study in Africa,’ he added.

He said papers emanating from his research were published in international and national peer review journals, and presented at conferences. The study also received international acclaim, having been awarded the: International Journal of Gynecology & Obstetrics John J. Sciarra IJGO Prize Paper Award for Best Clinical Research Article from a Low/Middle Income Country for 2012.

Naidoo currently works at Greys Hospital in Pietermaritzburg and continues to conduct research and teaching of undergraduate and postgraduate students.

He enjoys spending time with his family. ‘I also enjoy long distance running, having competed in and completed both the Comrades and Two Oceans ultra-marathons.’ He currently runs for the Chatsworth Athletic Club.