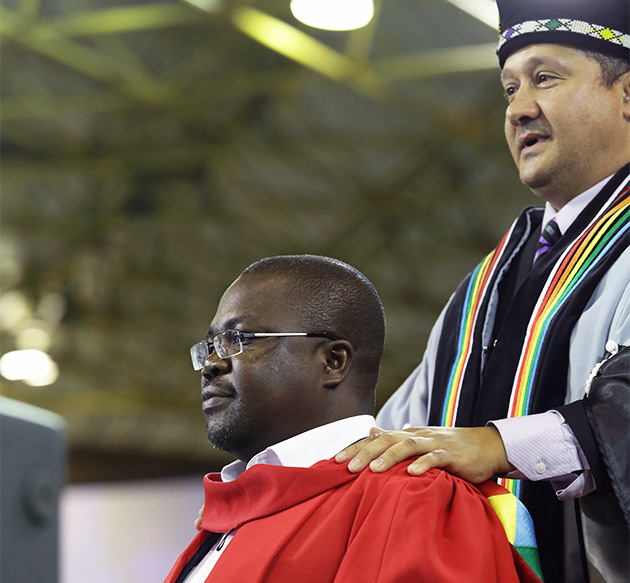 Novel research on the prevalence of vaginal thrush and yeast infections in HIV-infected women earned Dr Teke Apalata - who arrived in South Africa from the DRC as a political refugee in 2003 - a PhD.

‘Being a political refugee in South Africa, I had no financial support,’ said Apalata. ‘My first language being French, I did not know initially how to communicate in English. There were times when I really wanted to quit, but I always remembered that “winners never quit and quitters never win”. This is my personal motto and it always keeps me alive.’

According to Apalata, vulvo-vaginal candidiasis (VVC) is recurrent and less responsive to conventional anti-fungal therapy in HIV-infected women.

Apalata said not only was the infection a major public health challenge imposing a significant burden on health resources, recurrent VVC was also seriously affecting the quality of life of HIV-infected women, mainly during the AIDS stage.

Apalata said: ‘Prior to the AIDS epidemic, human mucosal membranes were thought to be equally susceptible to fungal infection. It is known that oro-oesophageal candidiasis occurs as a result of the loss of mucosal and systemic cell-mediated immunity. The latter however, does not play a role in the occurrence of VVC. The present study confirmed the absence of Th1/Th2 response by demonstrating a shift toward the Th17/Treg paradigm.’

The study confirmed that the interplay between infection and the immune system was intricate and relationships between factors were not always explainable. ‘It may be argued that this is a case of “cause and effect”. However, the occurrence of VVC with increasing immunosuppression in our population is of concern and different angles have to be explored in an effort to address this major public health problem.’

‘Helping to find solutions mainly for public health related challenges is what really keeps me going. I enjoy being involved in research that has a direct impact on peoples’ lives.’

He was a Lecturer at UKZN during the first two years of his PhD studies and is now a Consultant Clinical Microbiologist and Senior Lecturer at Walter Sisulu University.

'I consider myself very fortunate. Perhaps I have been at the right place at the right time. I don’t know if I could have achieved what I have without the help of Professor Prashini Moodley who supervised both my masters and PhD studies. She assisted me a lot and in many aspects of my life.'

‘UKZN is one of the prestigious universities in Africa and it is also well positioned worldwide.  Completing a PhD degree at UKZN is a dream that became a reality for me. I feel privileged.’

Obtaining his PhD had been a challenging experience, said Apalata, who acknowledged his wife, two sons and colleagues at UKZN's Department of Medical Microbiology for their support.