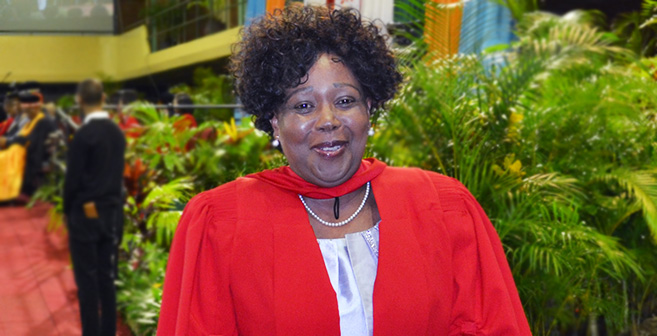 With a huge sigh of relief, AIDS researcher Professor Koleka Mlisana said she had reached a significant academic milestone in graduating with a PhD.

The thesis submitted by the renowned custodian of women’s health was titled: “The Impact of Sexually Transmitted Infections (STI) and Genital Tract Inflammation on HIV-1 Acquisition and Rate of Disease Progression in subtype C Infected women.”

Associate Professor and Head of Medical Microbiology at UKZN and the National Health Laboratory Services (NHLS), Mlisana said she had always been passionate about understanding the transmission and pathogenesis of HIV as these early events could potentially direct researchers to discovering mechanisms of preventing new infections.

‘Women carry more than half the burden of HIV disease globally,’ said Mlisana. ‘Transmission of HIV to women is more efficient than in men as they are the receptive partners with a much broader surface area. They are often not able to negotiate condom use by their male partners and the available female condom while not user friendly, has not been freely available until recently. Unborn babies are also at risk when the pregnant mother is infected.’

Mlisana said prior to her study cohort, most published data on HIV was from the northern hemisphere and therefore from subtype B infected individuals. ‘It was therefore a great opportunity to set up one of the first cohorts in South Africa where 95 percent of infections are subtype C. We needed to get an understanding of the local HIV disease, right from the factors promoting acquisition, viral and host responses to infection and the progression of the disease.’

The overall aim of her study was to assess the impact of bacterial vaginosis (BV), sexually transmitted infections (STIs) and associated genital tract inflammation on acquisition of HIV-1 subtype C infections. It also evaluated the rate of subsequent disease progression in women.

The study showed that syndromic STI diagnosis, which is dependent on clinical signs of vaginal discharge, was poorly predictive of laboratory-diagnosed STIs or BV and missed a significant proportion of women with asymptomatic infections.

Mlisana said: ‘The level of genital inflammation, as measured by cytokine concentrations in cervico-vaginal lavage, was similar in women with symptomatic and asymptomatic infections and therefore placed women at increased risk for HIV infection. While laboratory-diagnosed STIs and the presence of inflammatory cytokines in the genital tract were associated with increased susceptibility to HIV acquisition, vaginal discharge was not.’

Her work proposes, ‘In regions where HIV is prevalent and STIs are managed syndromically, targeted screening of populations at risk for STIs is critical and urgently needed.’

The study concluded that recognition of signs and symptoms of acute HIV infection (AHI) was important for early diagnosis of HIV infection. The proposed algorithm of risk-stratifying individuals for AHI provided a useful clinical tool, especially in resource-limited settings where there are limited or no routinely available tests for AHI. However, validation of this algorithm is needed to assess its utility.

Another important finding of her work is the high rate of rapid HIV disease progression, with nearly half of these subtype C–infected women progressing to a CD4+ T cell count of below 350 cells/µL within two years of infection. The implications of these findings with the increase of CD4+ T counts to 500 for ART initiation will see the majority of patients requiring ART initiation within their first year of HIV infection. The study emanated from the post-decade long study on Acute HIV Infection conducted by the Centre for the AIDS Programme of Research in South Africa (CAPRISA).

‘I am very grateful to God for giving me the ability and I give Him all the glory! I would not have achieved this without my supervisors, Dr Ayesha Kharsany and Dr Jo-Ann Passmore,’ said Mlisana.

She also paid tribute to her husband of nearly 33 years, Dr Zolile Mlisana, who has been a pillar of strength during her doctoral studies.

Mlisana advised young South African women to focus on their education and work very hard. ‘Be ready for opportunities that come your way and grab them with both hands,’ she said.