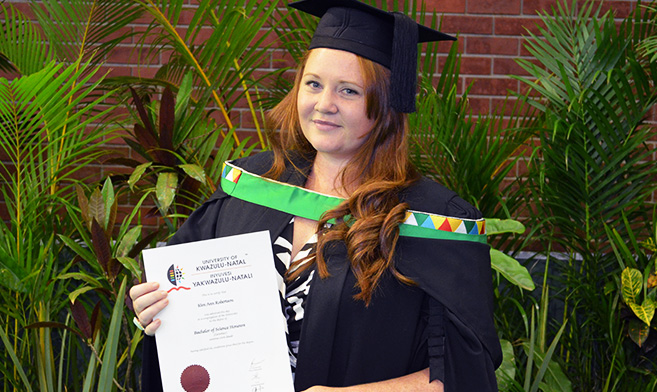 ‘I completed my undergraduate degree at UKZN and had a very pleasant experience, thus doing my honours here was an easy decision,’ said Robertson.

She said her experience of UKZN was that it was well run with very knowledgeable and helpful staff. ‘I received both the guidance and freedom I required to achieve my goals. The lecturers were very approachable and no task seemed too overwhelming with their support. I felt free to express my ideas and comfortable to carry them out in the laboratory.’

Robertson chose to specialise in genetics because she has always had a love for science. Doing microbiology and genetics in her undergraduate years kept her fascinated and hungry to gain more information. ‘Genetics provided the answers I was looking for as well as including the statistical calculations I enjoyed.

‘Studies I did included hereditary conditions in humans and animals as well as working with larger groups of patients trying to identify genetic markers for better treatment regimes. Genetics is a fairly new field and discoveries are being made regularly, thus this field is one of the most interesting.’

Robertson found the most interesting research undertaken during her honours degree to be the detection of Shiga toxin genes found in E. coli bacteria isolated from bovine. ‘The bacteria containing these genes can cause severe illness when ingested by humans,’ she said.

‘The study revealed the presence of these bacteria in bovine and the different strains seemed to be common among different herds. This indicates a possible health risk and the health regulations in abattoirs need to be strictly followed.’

Having completed her honours degree, Robertson is currently enrolled for a masters degree in Medical Science, working through the HIV Pathogenesis Programme on UKZN’s Medical School campus. ‘I am currently studying the broadly neutralising antibodies that the body generates in response to HIV and the associated evolutionary pathways of the virus envelope protein.’

Robertson paid tribute to the support of her friends and family. ‘I also could not have reached this level without the help of the UKZN lecturers and laboratory staff, and for this I am truly grateful.’

When not busy with research, Robertson plays hockey for the UKZN hockey team and has recently joined the UKZN underwater club with the hope of obtaining her SCUBA licence. She enjoys time outdoors - camping and hiking with friends is one of her favourite pastimes.

Robertson thanked both UKZN and the National Research Foundation (NRF) for the scholarships she received during her honours year.