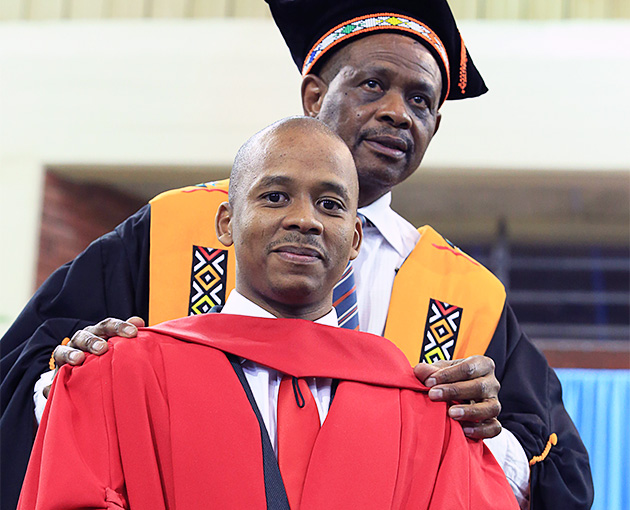 Dr Sandile Ngcobo was involved in internationally ground-breaking digital laser research as part of his PhD degree in Physics.

Ground-breaking international laser research was the foundation for the PhD in Physics degree awarded to Dr Sandile Ngcobo at a Graduation ceremony of the College of Agriculture, Engineering and Science held on the Westville campus.

KwaZulu-Natal-born Ngcobo’s PhD thesis, which dealt with applications of digital holograms for the selection and detection of transverse laser modes, was supervised by Professer Andrew Forbes, an Honorary Professor in the School of Chemistry and Physics.

Forbes and Ngcobo, are based at the Council for Scientific and Industrial Research (CSIR) in the Mathematical Optics Research Group.  The group’s research led to the development of the world’s first digital laser that uses a liquid crystal display (LCD) in 2013 with their findings published in the prestigious journal, Nature Communications.

In conventional lasers, the shape of the light that is emitted is either not controlled at all or is a single shape selected by expensive optics. The CSIR team expertly demonstrated that this can all be done inside the laser.

The digital laser uses the LCD as one of its mirrors fitted at one end of the laser cavity. Just as with LCD televisions, the LCD inside the laser can be sent pictures to display. When the pictures change on the LCD, the properties of the laser beams exiting the device change accordingly.

‘I believe the digital laser will be a “disruptive” technology,’ said Ngcobo. ‘This is technology which may change the status quo and which could create new markets and value networks in the near future. The research into the digital laser which continues, adds to the CSIR’s strong track record in the development of laser technology in mathematical optics.’

Acting Deputy Vice-Chancellor and Head of the College of Agriculture, Engineering and Science, Professor Deo Jaganyi, said Ngcobo’s cutting-edge research was a high profile achievement for both UKZN and South Africa in the international scientific research arena.