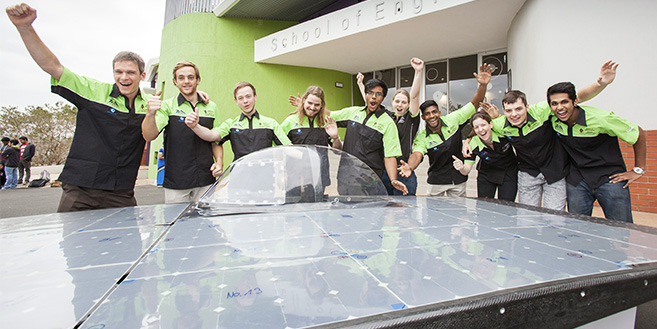 Six UKZN Mechanical Engineering students who were part of the team which created an award-winning solar-powered car, graduated with BScEng Degrees.

The proud graduates worked on the 2014 solar car, iKlwa, which came first in the South African category and third overall in the epic 2014 Pretoria to Cape Town eight-day Solar Car Challenge, covering a distance of 2 418.3 km and racing against teams from all around the world.

The UKZN team has since signed up to participate in the 2015 World Solar Car Challenge, scheduled to take place in Australia later this year.

Hulamin, the major sponsors of Iklwa, have pledged a further R1 million to send the team to Australia as they were so impressed with the students’ performance last year.  It will be the first time an African team has entered this international event.

Raghubeer said his four-year Mechanical Engineering degree had been a lot of work but a very good experience.  Currently a Training Engineer at South African Breweries, he found that once he had adapted to the workload of the degree, he enjoyed it and was thankful for the experience.

Fellow graduate Woods, who found his time at Mechanical Engineering extremely rewarding, has decided to pursue his masters degree this year.  ‘My experience of Mechanical Engineering can be summed up in two words – “hard work”. Although the journey was a stressful one, especially towards the end, I have learned more in four years than I could have ever hoped, especially from being part of the UKZN Solar Car Team. My dedication paid off and I am delighted to be graduating cum laude, a goal I had set myself in first year. Woods is currently studying towards his masters degree on the development of a commercially viable electric vehicle.

Witteveen is also pursing a Masters in Mechanical Engineering degree this year and developing a commercially viable, lightweight, performance electric vehicle.  ‘Studying mechanical engineering has been a challenging but fulfilling four years. I was lucky enough to work on the solar car project, where the opportunities and experience gained have been invaluable. It’s been a privilege to work with many like-minded and lateral thinking people, while being able to learn from knowledgeable supervisors who have guided and shaped our progress through the years,’ he said.

Sinclair has moved to Switzerland where he is working on his masters at CERN, the European Organisation for Nuclear Research that operates the largest particle physics laboratory in the world. He is designing tooling for a new small wheel for the ATLAS experiment.  ‘Studying mechanical engineering at UKZN had many ups and downs. I am happy and relieved to say that most of those were ups. I enjoyed my courses and loved every hour spent on my final year project. I have been exposed to so many different aspects of Mechanical Engineering and feel privileged to have been part of the Department. I was surrounded by great students and lecturers who made my four years that much better,’ said Sinclair.

‘I’ve always wanted to study Engineering and hopefully make a contribution to the field,’ said Rugdeo. ‘Early on in my degree, myself and a colleague decided that we should try to maintain a minimum mark of 75%. And that was that. Through the hard work and dedication over the years, I saw this goal materialise.  I was given the opportunity to be involved with the UKZN Solar Car Team which was a dream come true, but quite possibly the most challenging task I have ever experienced. Looking back though, I wouldn't change a thing,’ said Rugdeo.

iKlwa is isiZulu for ‘a short and agile spear’. The car was named iKlwa because like a spear it pierces the air with its aerodynamic design, being light, nimble and agile. It represents an innovative and efficient design promoting green energy for the future that is rich in local skill and creativity.

iKlwa has an asymmetrical design with a highly aerodynamic profile that has a small frontal area to improve the aerodynamic drag.  The theoretical drag of the car is very low which means that less energy will be used enabling the car to go faster.

The car - lightweight yet rigid and safe with a fully carbon-composite monocoque chassis - has 6m2 of silicon solar panels to harness energy from the sun which is stored in 21kg lithium ion batteries.